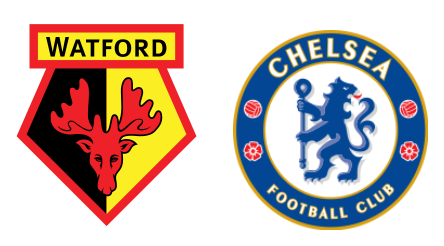 I might have been kidding myself we’d learned something from the draw with Burnley, especially after 7 goals in our next two games against Leicester and Juventus, because our inability to take our chances bit us on the backside again at the weekend. Frustrating when we were clearly head and shoulders better than Manchester United on Sunday and even more frustrating we’ve left ourselves no breathing space in the table.

Tonight’s game takes us away to Vicarage Road, to face Claudio Ranieri’s Watford. The Hornets, who coincidentally also battered United but finished better than we did, with a 4-1 win that saw the wheel firmly wrenched from Ole’s grip, didn’t fare so well against Leicester last time out, with a 4-2 defeat. That leaves Watford 16th in the table, with 13 points and no matter how much Ranieri tries to play it down, they won’t have the mindset of underdogs.

We’ve done pretty well away from home, winning the last four without conceding but we’ll be ringing some enforced changes with injuries mounting up. Both Chilwell and Kante were notable in their absence at the weekend and they’ll both be missing again, Werner might be joining them as well, so Lukaku needs more than a 10 minute sub appearance tonight.

Going into today’s game, Watford manager Claudio Ranieri, says “I am confident [the squad will cope], but of course if I had all my players it would be better. The club has a very good group of players and now, [for] those who have played less, is the right moment to show what they want to do in the Premier League. It’s not enough to ‘want’ in the Championship, now they have to show what they can ‘do’ in the Premier League, but I am very confident. It’s okay, I don’t like to cry. I want to react, I want my players to be positive, confident and fight together.

We are the underdog. The whole world knows this. We play Chelsea, one of the best teams in the world against Watford. Okay. We lost the match!  We play. We then shake their hands.”

Thomas Tuchel, meanwhile, says “It will be challenging, but the good thing is it was challenging before. We don’t change our routine, we have close communication with the medical and fitness departments, and we try to predict the load and who is overloaded. We’ll see what we need in the next games from there. Step by step. If you look too far ahead you can see this will be some tough weeks, so that’s why we focus on the details, on the next game and maybe the next two games. It’s on the players to not only be strong in the games, but take recovery very seriously. Sleeping and taking the right food, because games are intense and we need to have a certain identity and mentality. We are not scared to rotate. We trust the full squad, and it’s no secret you need a full squad in weeks like this.

They [Watford] play with more confidence and try to implement high pressing. They had a great result against Man United and try to play with emotion, get the crowd behind them. We see this. Claudio Ranieri speaks for himself. He had so many clubs, such an experienced coach. It will be the first time i play against him.”