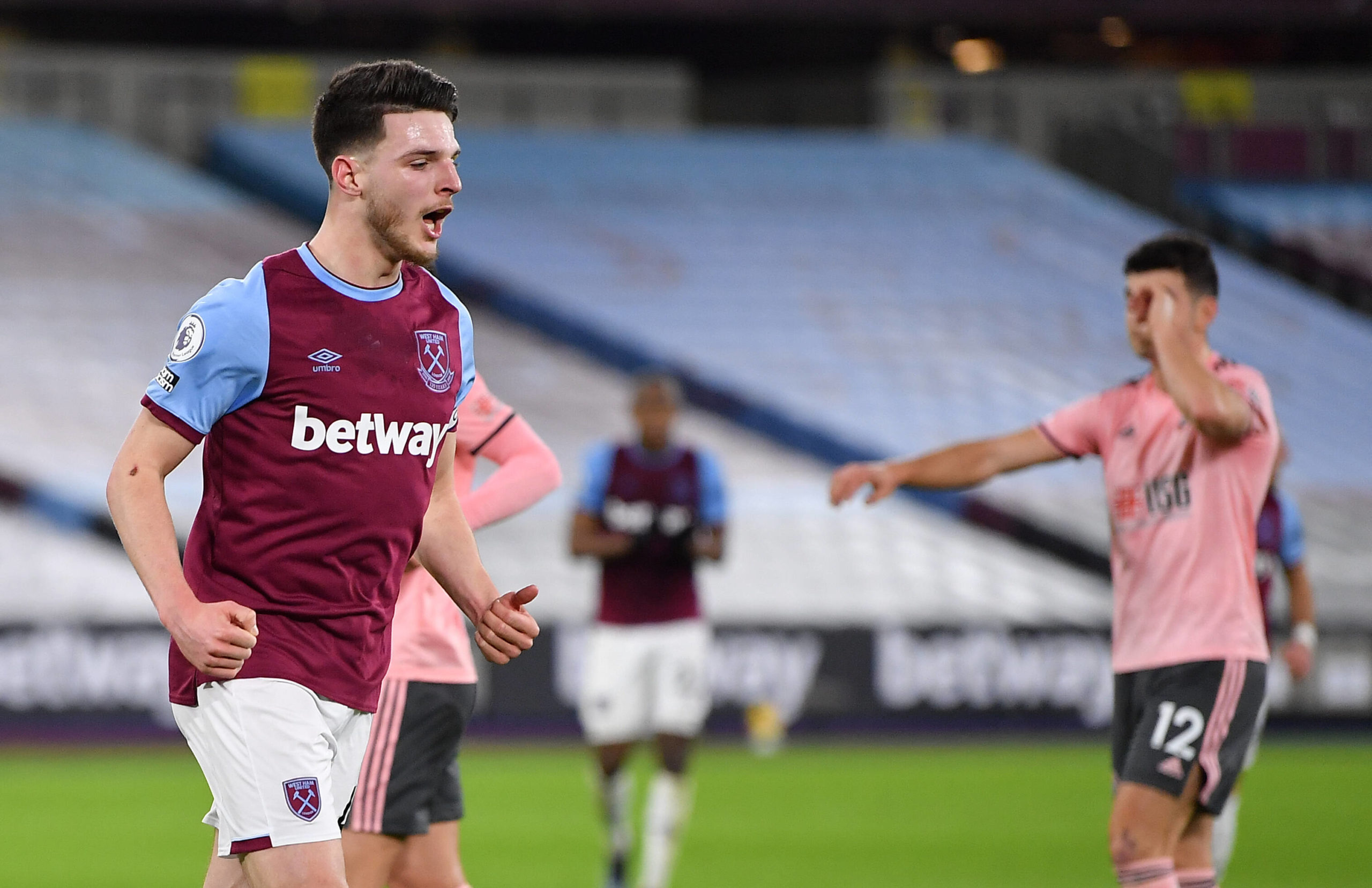 West Ham United boss David Moyes has issued a transfer warning to Chelsea and Manchester United over the valuation of in-demand Declan Rice.

Heavily linked with a move away from the London Stadium over the last two transfer windows, Rice is one of the most prized prospects in the Premier League.

Chelsea and United have emerged as the leading candidates to land the 22-year-old deep-lying playmaker, with West Ham reportedly trying to fend off his suitors.

As per the Daily Star, club owner David Sullivan has slapped a staggering £100 million price tag on Rice’s head.

The Englishman’s contract in London is due to expire in 2024, which puts the Hammers in a strong bargaining position ahead of a potential assault from the Premier League juggernauts.

Rice has played a pivotal role in helping West Ham become genuine top-four contenders in the Premier League this term.

The vice-captain has not missed a single minute of his team’s top-flight action in 2020/21, registering a goal and an assist in 26 league appearances.

Well aware of Rice’s importance to West Ham, Moyes has pinpointed the valuation of his headline performer.

Speaking ahead of his side’s Premier League showdown against Leeds United, Moyes said: “I do not agree with the owners that Declan Rice is a £100m footballer… far, far more than £100m.

“I look at the players who have joined some clubs from overseas and come in and had nowhere near the impact that Declan Rice would have.

“Also, he is English, [we have] just had Brexit, so I would not agree with the owners if Declan Rice was only £100m. No, I would not.”

Despite his young age, Rice has already amassed over 120 Premier League appearances.

He has also established himself as a regular starter in the England national team under Gareth Southgate and is expected to play a prominent role in the upcoming European Championships.

Why do Chelsea want Rice back?

Rice spent his early ages at Stamford Bridge before departing the Blues youth academy to move across town in 2014 as a 14-year-old.

Chelsea have deeply regretted their decision not to give the youngster benefit of the doubt and are now ready to splash out a fortune to bring him back.

N’Golo Kante and Jorginho have been vital in west London over the past few seasons, but Thomas Tuchel is looking to inject fresh blood into his midfield.

The Frenchman has endured a tumultuous couple of years and is not as invaluable as he used to be upon his arrival from Leicester City in 2016.

A string of injury setbacks and drop-off in form has seen the World Cup winner become a bit-part player at Stamford Bridge.

As for the Italian metronome, he has been able to dictate the pace of proceedings with his vision and accurate passing throughout his two-and-a-half-year spell at Chelsea.

However, the 29-year-old has often tended to collapse in big matches, which is the main reason behind Tuchel’s decision to search for a new midfielder.

Splashing the Cash! A round-up of all Chelsea’s transfers so far.
Tuchel concedes Mount and Jorginho’s absence against Atletico Madrid is massive blow