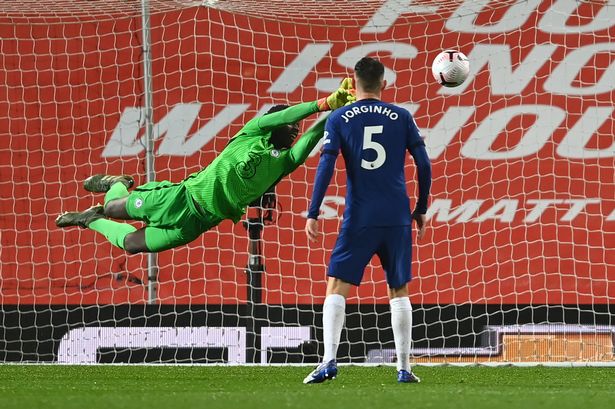 It’s fair to say it wasn’t a classic at Old Trafford on Saturday. Frank Lampard can take some positives from another Improved defensive performance. Cleansheets have been hard to come by since his tenure began at the start of last season. Here’s hoping the attacking side of things start to click into place.

Edouard Mendy – Three cleansheets in four matches since the Senegalese international arrived at Stamford Bridge. He pulled off a number of impressive saves at Old Trafford. 9 (Man of the match)

Thiago Silva– Showed his experience in organising things at the back. 8.

Kurt Zouma– Looked far more comfortable as part of a central back three. 7.5.

Ben Chilwell – Got forward well in a more attacking wing-back role. Looks a far better option than Marcos Alonso as he tracked back into the left-back role when required. 8.

Reece James – His crossing abilty was as impressive as ever. His defensive abilty has been questioned, but going forward he is a great asset. 8.

N’Golo Kante – Worked tirelessly in the midfield. Showed signs that the quality he possesses could be making a return. 7.5.

Jorginho – Does a job, even though it doesn’t always look as effective as it should be. 7.

Kai Havertz – Struggled to get into the game. Will have better days. 6.

Christian Pulisic – Showed some glimpses, but a looks a couple of games short of full fitness after a lengthy layoff. 7.

Timo Werner– Didn’t receive any service. A frustrating afternoon for the German. 6.5.