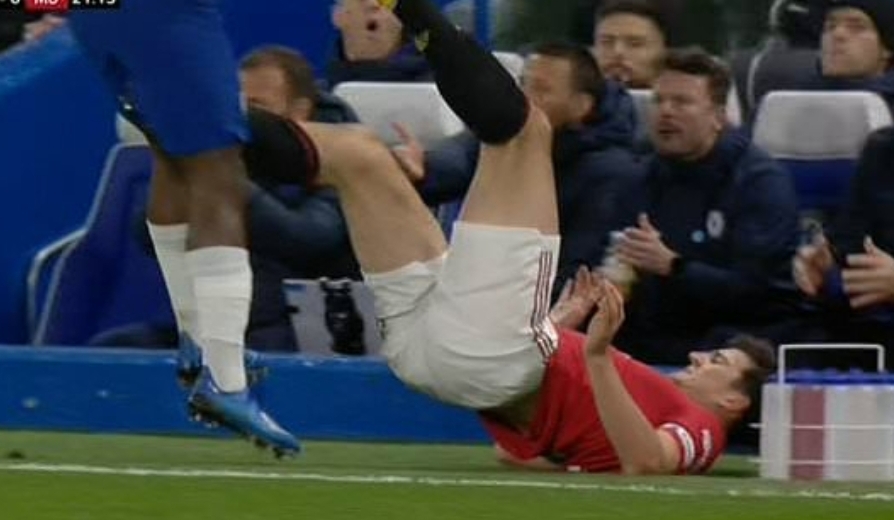 It was a night of drama at Stamford Bridge as Chelsea fell to a 2-0 defeat to Manchester United. Both goals were avoidable, highlighting Chelsea’s defensive frailties yet again.

However, there were bigger talking points to proceedings. The first flashpoint was Harry McGuire kicking out at Michy Batshuayi. Catching the Belgian in the worst place possible. Despite VAR reviewing the England defenders actions, it was deemed to be not be violent conduct.

It was similar to the incident that saw Son sent off for Tottenham against Chelsea earlier this season. A lack of consistency shown by VAR official Chris Kavanagh.

After Anthony Martial had given United the lead, Chelsea went in search of an equaliser. Kurt Zouma headed home to send Stamford Bridge into raptures of delight. However, VAR spotted a push by Cesar Azpilicueta on Williams. Incredibly Kavanagh didn’t notice Fred pushing the Chelsea captain into Williams in the first place.

Referee Anthony Taylor also saw fit to book Willian for diving, even though replays showed the Brazilian was indeed fouled.

It got worse as Mcguire headed home a second for the Red Devils to rub salt in the wounds.

That wasn’t the end of the drama. Late substitute, Olivier Giroud headed home only for VAR to intervene again. Once again ruling against the Blues. In all fairness it was marginal but the right decision. Albeit very close to call.

Michy Batshuayi had a night to forget. Chelsea’s failure to sign a striker in January is evident on the Belgium international’s performance. Started in place of the injured Tammy Abraham, Batshuayi missed a host of chances to further compound a miserable night.

Conspiracy theorists could be found on social media following the decisions last night. Both Taylor and Kavanagh are from Manchester! It’s madness that the premier league would leave themselves open to such criticism. But you have to ask yourself why? Are there not other officials that could have taken charge of the game?

It sounds like sour grapes, and I doubt either official would be that blatant. It does ask a valid question about their impartiality though.

Chelsea now need to dust themselves off and get ready for another huge test on Saturday lunchtime. Tottenham visit the Bridge for another vital premier league clash.

Mario Melchiot: ‘Thinks a step ahead’ – Mason Mount proves doubters wrong with a show of workrate, skill, and reading of the game
‘Proving football is a game of minds’, ‘composure and intelligence’ – How some Chelsea fans reacted to Billy Gilmour’s full premier league debut