Chelsea will be hoping for a quick reaction following Saturday’s defeat to West Ham United. Tonight The Blues have a great chance to right some of the wrongs as they entertain Aston Villa (kick off: 7.30pm GMT).

Kepa Arrizabalaga will continue between the sticks yet again. The Spaniard has been under pressure recently, but put in a solid show when called upon at the weekend.

As the fixtures come thick and fast, changes will be made in this area. The in form Reece James should continue at right-back. Cesar Azpilicueta will be due a recall with the left-back role having his name on it. The Blues made changes last week, and are likely to switch it around again for the centre-back pairing. Kurt Zouma is due a rest, and say Fikayo Tomori and Andreas Christensen could partner each other in the centre of Chelsea’s defence.

Jorginho has looked tired recently. His performances haven’t been up to the standard seen earlier in the campaign. For this reason, N’Golo Kante and Mateo Kovacic should start in the centre of midfield, with Mason Mount up ahead of them.

In what would effectively be a front three, Frank Lampard will be looking to make changes ahead of the Saturday lunchtime clash at Everton. Callum Hudson-Odoi made a return against the Hammers, and is now inline for a start. Willian who rested will be back in the starting XI. The striker role is dependent on the fitness of Tammy Abraham. The England international will be itching to start against the club he spend last season on loan with. If the 22-year-old isn’t fully fit, Michy Batshuayi is likely to start. 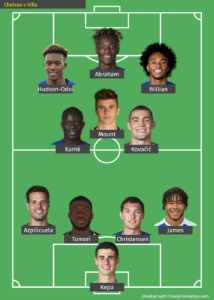