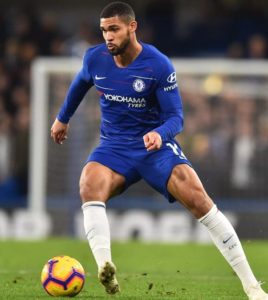 Chelsea midfielder, Ruben Loftus-Cheek has excited Chelsea fans by giving a long-awaited update on his fitness. The 23-year-old took to social media site, Twitter, to give Blues fans a glimpse of his progress.

The England international has been out since May, with a ruptured Achilles tendon injury, sustained in a post-season friendly against New England Revolution. It was a bitter blow for Loftus-Cheek, which led to him missing the Europa League Cup Final against Arsenal. Despite the setback, he penned a new five-year-deal in July, to keep him at the club for the foreseeable future.

Chelsea fans have been waiting patiently for his return to action. Six-months on, the midfielder now looks closer than ever to a long-awaited come back.

Posting on earlier today, the footage shows Loftus-Cheek working hard in the gym, testing his strength of movement, and also some work with a ball.

Loftus-Cheek spoke to Versus about his recovery last month, at an Adidas store opening event. He said:

“It’s going well! It’s been a long time and I’ve had a few setbacks as well. It’s never been just a straight path but I’m close now…I’ve been running and moving, I feel I’m right on the edge. I’m close and I can’t wait.”

The Chelsea youth product has high hopes with Euro 2020 on the horizon.

“Hopefully now I can get half a season of playing well and stake my claim. Obviously going to the World Cup and playing a little bit there helps – and hopefully playing regularly in the Chelsea team is the start I need to get back with the national team.”

Loftus-Cheek returning will a huge boost for Frank Lampard. The Chelsea boss has relied heavily on youth, as well as having to deal with a number of injury issues. The 23-year-old offers another dimension to the squad. If he can stay fit, he will be a huge asset to both Chelsea and England. Here’s hoping it’s sooner rather than later, with the Blues facing a testing amount of fixtures over the next month.