Today Chelsea entertain West Ham (kick off: 3pm GMT) in a premier league clash at Stamford Bridge. The Blues are hoping to get back to winning ways after last weekend’s defeat at Manchester City, and a draw from the midweek Champions League trip to Valencia.

Kepa Arrizabalaga had what can be described as a good and bad game on Wednesday. Many fans felt he could have done better with both goals that were conceded, but he did pull off an excellent pemalty save. Lampard could consider resting the Spaniard at some point, but for now the Blues boss is likely to keep Kepa as his number one.

Fikayo Tomori will be hoping to return after being rested in midweek. The 21-year-old is likely to partner Kurt Zouma, with Andreas Christensen dropping to the bench. Reece James is in great form, and should retain his place at right-back. Frank Lampard could opt to rest Cesar Azpilicueta with a busy schedule ahead, leaving Marcos Alonso and Emerson Palmieri as the options at left-back. The former hasn’t figured since before the international break, and will most likely get a chance to prove himself in what appears to be a problem area for the Blues.

N’Golo Kante, Jorginho and Mateo Kovacic have all started the previous two fixtures. The trio have performed with mixed fortunes. Kante scored at the Etihad, Kovacic netted his first in a blue shirt at the Mestalla, but Jorginho didn’t perform as well as he has previously. Even so, I feel Lampard will stick with those three across midfield.

Christian Pulisic scored his seventh-goal in seven-appearances in Spain. The American is showing fans exactly why they paid £58m for his services. He has to start on the right-wing this afternoon. On the right-hand-side, Willian wasn’t at his best during the week. A rest could be needed for the Brazilian. However, Chelsea’s only other option at the moment is the out of favour Pedro.

Callum Hudson-Odoi could return, he has trained since being ruled out with a hamstring problem, but today will come too soon for the 19-year-old to start.

Tammy Abraham is definitely out after picking up a hip injury during the trip to Valencia. Michy Batshuayi and Olivier Giroud are the options left to choose from. Batshuayi looks the more likely to start. The Belgian has delivered when called upon this season, scoring five-goals, in 13-appearances. Giroud has had a frustrating campaign so far, making only six-appearances in all competitions. 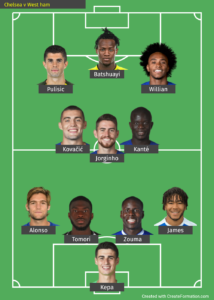