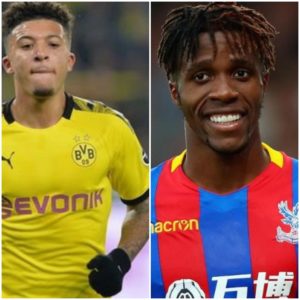 The transfer window reopens in just over a month from now, with the Blues are still awaiting a verdict on their transfer ban appeal. However, rumours will continue of who Chelsea may, or may not be interested in signing in January. Whatever the outcome, the ban is due to end in time for the summer 2020 window.

One area of improvement to ponder is on the right-wing. Pedro has seen himself largely left out this season. Meanwhile, Willian has shown decent form, but is yet to sign a new deal. Both players will see their current deals expire at the end of this season.

Neither are getting any younger, and fresher legs would be an asset to the squad moving forward.

Jadon Sancho is a name on the lips of many fans at the moment. The Borussia Dortmund youngster has become an England regular, with many pundits and fans predicting a bright future in the game for the 19-year-old. Chelsea have been linked with the former Manchester City youth product on more than one occasion. Most recently, earlier this month, the winger, and Zaha, were rumoured to be on a list as Chelsea plan a £150m transfer splurge.

Sancho offers bags of pace, great movement, and is technically very gifted. At only 19-years-of-age, he has a lot to offer already, but also a lot to learn.

Another player that could do a job on the right hand side is Wilfried Zaha. The Ivory Coast international has been in fine form since returning to Selhurst Park in 2014. That followed a brief and largely unsuccessful spell at Manchester United.

There will be other options, but these two offer a different level of experience. Zaha is 27-years-old and know a the premier league inside out. He has versatility when required, operating on either wing. Pace and dribbling ability make him a good option to bolster the squad.

Sancho is young and has his whole career in front of him. Already a regular in the Bundesliga, the England international would be a great signing for Chelsea. Adding to the Blues already impressive young core, Sancho could become a star of Chelsea’s future. To top it all off he was a Chelsea fan whilst growing up. Reported recently by the Express, the youngster admitted  that he idolised Blues managers Frank Lampard, and club legend Didier Drogba.

The Camberwell-born youngster wouldn’t be cheap, but another young winger with flair would fit perfectly into what Frank Lampard is trying to achieve at Stamford Bridge.