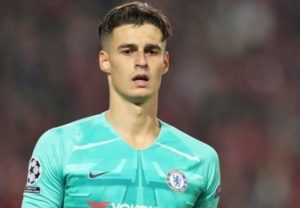 Kepa Arrizabalaga made headlines in August of last year when he became the world’s most expensive goalkeeper. The Spaniard made an astonishing £72m move from Athletic Bilbao, leaving many fans shell-shocked. It’s fair to say that unless you’re an avid watcher of La Liga, it’s unlikely you’d have known a lot about him.

His first season saw mixed reviews. The Carabao Cup final fallout for failing to leave the pitch when Maurizio Sarri wanted to substitute the 25-year-old set tongues wagging. The Italian later played it down as a misunderstanding.

On the plus side, Kepa was the hero in a Europa League semi-final penalty shootout victory against Eintract Frankfurt. The win sent Chelsea to Baku, where the Spanish international played his part in the Blues 4-1 victory over Arsenal.

This season has been much of the same. Last night typified the highs and lows of his Chelsea career so far.

Having been castigated by some for nearly gifting Sergio Aguero a goal on Saturday, some fans were appalled by his failure to keep out the opening goal at the Mestella.

Kepa then turned hero, making a fabulous save from a Valencia penalty to keep the Blues ahead at the time. However, the Spaniard was beaten by a late cross-come-shot that agonisingly evaded his grasp. It was harsh on Kepa, but some saw it as another opportunity to give him some stick. Others have stuck up for 25-year-old.

Here’s how some fans reacted on social media…

I hate that I have these inner thoughts cos I do like Kepa. He's got a nicely shaped head, cheeky wink vs spurs last season and is probably a nice guy. However, I'm getting serious Luiz x Alonso vibes. (Good for clutch moments but can't do his primary job.) Tell me I'm lying pls. pic.twitter.com/2YFqE2JjS7

Kepa pulled his arms away thinking it was going over. He could have tipped it over or even caught it with a jump. So please don't tell me he wasn't at fault there. Unlucky from the Spaniard #CFC pic.twitter.com/tVlzd6RbF9

Kepa’s Prevented us from Losing & Winning at the Same Time. Not a Great Day for him. #cfc

Weak wrists they say ??‍♂️. Goalkeeping is one of the hardest jobs, any mistake you do you can’t hide from unlike some other positions. Also doesn’t help your confidence when the defence isn’t at its best either. If it wasn’t for @kepa_46 we wouldn’t even be in Champions League ??? pic.twitter.com/iXCZhuRtr3

Fun fact. 100% of the people saying Kepa should save the first goal have never played a competitive game in goal

The best keeper in the world. My kepa #cfc pic.twitter.com/Cw2v1nsaTe

The jury is out on Kepa at the moment. He has the potential to become one of the best keepers in the world. A bit of fine  tuning to his game and Chelsea will have a key part to their jigsaw. Clean sheets have been rare this season, but that is largely down to uncertain defending. Plenty for Frank Lampard, and Jody Morris to work on defensively.

Should Chelsea consider buying a new goalkeeper, or is Kepa the future? Feel free to comment below…