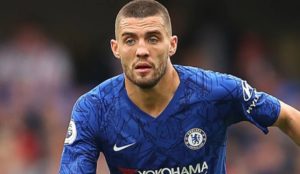 It’s been a long time coming, but Mateo Kovacic has scored a goal for Chelsea. Yes, that’s right, he’s finally found the back of the net in a Blues shirt.

Overall, for club and country, the Serbian had not found the back of the net since January 2017. Stretching a total of 145-appearances, including time at former club Real Madrid.

Chelsea fans were excited to finally see him score, with many taking to social media to share their excitement.

If Kovacic can score goals then we're in for an absolute feast. Floodgates have been opened.

There's no stopping this beast now ?

KOVACIC HAS SCORED A GOAL . Ladies and Gentlemen!!!! https://t.co/ukrPSTGaxV

An Absolute Baller??
The best among the rest, without or with goals.
We Love Kovacic??? pic.twitter.com/8uB1CUom0k

The goal itself was a shot from the edge of the box that beat Valencia stopper Cillissen low to his right-hand side. In truth the Dutchman probably should have done better.

Unfortunately the goal wasn’t enough for the Blues to claim all three-points. Despite going behind, Kovacic drew Chelsea level straight away. Christian Pulisic then put then put the visitors in front, before a late Daniel Wass strike restored parity. Kepa Arrizabalaga also played his part by saving a penalty whilst the Blues were 2-1 up.

However finishing 2-2, the West-London still have their Champions League fate in their own hands. It now comes down to the final group game where the Blues entertain Lille.

The 25-year-old is having an excellent campaign after completing a permanent move to Stamford Bridge last summer. A fine partnership has blossomed with Jorginho since Frank Lampard took over the reins at the club.

The move reportedly costing £40m, was allowed to take place despite Chelsea serving a transfer embargo. The reason being the former Inter Milan man was already registered having  joined the Blues in a loan deal last season.

Next up for Chelsea is the visit of West Ham United. Frank Lampard will be hoping Kovacic can continue his goalscoring to claim the points against the Blues boss’ former club.