Frank Lampard has made two of changes from Saturday’s defeat at Manchester City. Reece James is preferred at right-back, with CesarAzpilicueta moving to the left-back role he occupied during the second-half against Ajax on matchday four.

The other change is Andreas Christensen coming in for Fikayo Tomori. The Dane has missed out recently due to injury, and his return will be welcomed by many,with The Blues also without Antonio Rudiger. 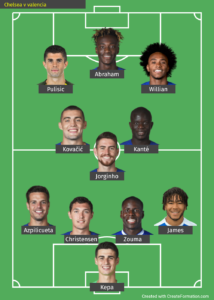 A win this evening will see the Blues advance to the knockout stages of this year’s competition. In the earlier meeting on matchday one, The La Liga club clinched the three points with a 1-0 win at Stamford Bridge. Rodrigo the goalscorer.

A draw tonight would leave Chelsea’s qualification on a knife-edge, and a defeat would take it out of their own hands completely.

Has Frank Lampard picked the right team? Comment below on your thoughts of this evening’s line-up.

James, and Mount to start – Predicted lineup, (4-2-3-1) against Valencia
‘There’s no stopping the beast now’ – How some Chelsea fans reacted to Mateo Kovacic finally scoring