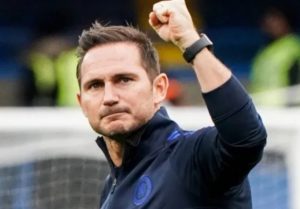 Frank Lampard has given his opinion on how his tenure has started as Chelsea boss.The 41-year-old returned to the club during the summer, after spending 13-years as a player at Stamford Bridge.  His managerial career began last year in charge at Championship club, Derby County.

The Blues’ all-time top goalscorer has exceeded many fans expectations. The  Blues are fourth in the Premier League after 13-games. The next stage of the Champions League is also within touching distance.

Talking to chelseafc.com, Lampard gave his views on how things have gone so far.

The youngsters that Lampard has given the opportunities too have impressed him. He said:

Talking of Saturday’s defeat to Man City. Lampard feels it was an important experience for the lads.

“If I can help them along the way, I certainly will. Experiences like this are great for them. They have to take them on the chin, in terms of the defeat, but also realise these are the levels we want to get to”.

Talking of pre-season expectations. Lampard pointed out it’s difficult to assess until you’ve worked with players.

“It’s hard to explain my expectation at the start of the season, because until you’ve worked daily with the players – and you bring players who were playing in the Championship last year and younger players that have never been here – you don’t quite know how that’s going to drop and how it ends up”.

However, the Chelsea boss is well aware of other challenges, and how they need to use the best of their ability to bounce back.

“I’ve been really happy with a lot of our stuff this season, so maybe that means we’re slightly ahead of the curve. But in football, the curve will go downhill very fast if you don’t keep on yourself and take a lot of the lessons from this game and move forward. Now our test is: can we really bounce back from a defeat when we’re used to winning? That’s another challenge for us all”.

Chelsea’s fine start under Frank Lampard has brought a buzz to Stamford Bridge. A feeling that something special is not far away. The inclusion of academy stars is one that is appreciated greatly by fans, adding to the excitement of being a Chelsea fan this season.