Kante, Jorginho, and Kovacic all to start – predicted Chelsea lineup, (4-3-3) against Man City

This weekend sees Chelsea face a difficult trip to Manchester City. Kicking off a 5.30pm (GMT), The Blues will be keen to test themselves at the Etihad, after they leapfrogged the champions into third-place, prior to the international break.

With a vital champions league clash at Valencia next week, a change of the back-four that started in the 2-0 win against Crystal Palace is a possibility. However, Blues boss Frank Lampard might favour keeping it the same tomorrow, or slightly tweaking it, instead making changes on Wednesday. Reece James’ recent performances should make him a certain starter at right-back. A centre-back pairing of Kurt Zouma and Fikayo Tomori, with Cesar Azpilicueta reverting to left-back. A role he played during the second half of the 4-4 draw with Ajax.

This is where changes are likely to be made. It’s a rare opportunity that N’Golo Kante, Jorginho and Mateo Kovacic are all available at the same time. Frank Lampard could feel that shoring up the centre of the midfield will combat what the Citizens have to offer in that area of the field. Playing all three would allow Jorginho to act as playmaker with Kovacic and Kante breaking up play. The two could maraud forward when required. They can also all alternate positions when needed.

Willian is likely to start on the right-hand side with the left being the position where uncertainty is an issue. Mason Mount, Christian Pulisic or Callum Hudson-Odoi being the options. The latter two are both carrying knocks, athough Pulisic has trained after missing the international break. Mount is more effective in the middle of a three, but has played the wider role on occasions this season. Although The youngster won’t offer a great deal of width, resting Pulisic following a hip injury could be of a long-term benefit. The Blues have a packed schedule coming up, including crucial Champions League games, and the busy festive period.

It’s as good as nailed on that Tammy Abraham will start. The 22-year-old scored his first goal for the England senior team last week, and will hoping to add to his ten-premier league goals this season. 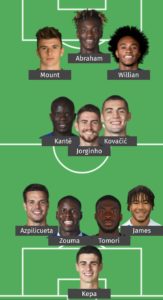