‘I will lose all respect for him’, He will always love Chelsea’ – How some fans have reacted to Jose Mourinho possibly becoming Tottenham boss 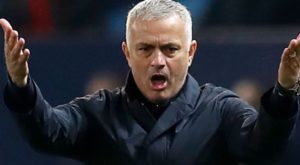 News of Mauricio Pochettino’s sacking as Tottenham manager wouldn’t usually affect Chelsea in any way whatsoever. Barring maybe a little chuckle that a major rival are managerless. Especially as the Argentine has done a decent job on a very small, if not non-existent budget.

However, former Chelsea boss, Jose Mourinho is the hot favourite to take over at the North-London club. The Portuguese won three league titles for The Blues in two different spells. Both times his reign ended controversially with many fans pointing a finger at the club. It has become apparent that Mourinho is like Marmite… You either love him or hate him.

His persona is a man with a lot of confidence in himself. When first arriving in West-London in 2004, the 56-year-old referred to himself as ‘The special one’. It’s that arrogance that has followed him about throughout his career.

Taking over at Manchester United was a bitter pill to swallow. A spat with Antonio Conte that started when The Blues beat United 4-0 in October 2016, turned the tide for a lot of Chelsea fans. The love for Jose was fading from that point onwards.

Now Blues fans are very likely to see the manager they once loved in charge of a club that have the most disdain for.

Sky Sports are reporting an announcement is imminent, with talks omgoing…

BREAKING: Representatives of Tottenham and Jose Mourinho are this evening locked in negotiations for the Portuguese to replace Mauricio Pochettino.

Expecting José Mourinho to be announced as new Spurs manager tomorrow. Mauricio Pochettino victim of his own success. Sacked just five months after leading his team out at Champions League final

Chelsea fans have reacted to the news on social media. It’s a bit of a mixed reaction. With some feeling he’ll always have a place as a Chelsea great after what he achieved at Stamford Bridge. Meanwhile others feel it’s the last straw.

Here are a selection of reactions…

I still respect and love Jose Mourinho. This is football, which is a job for players and managers alike. People tend to forget that.

He will always love Chelsea, do not get it twisted. Dont care how unpopular my opinion is either.

Unpopular opinion: Sarri is more of a Chelsea man than Jose Mourinho.

Come at me you dogs. I've been waiting for this moment. The Art of War. pic.twitter.com/69TkklapgB

Can we put to bed once & for all that Jose Mourinho has any real affection for Chelsea, Jose loves one thing & that’s himself, all about him, he goes for the money & possibility of trophies, I’ve moved on. We had the best Mourinho, he is a busted flush, he is done

If Jose Mourinho goes to Tottenham I will lose all respect for him. Manchester United is one thing, but going to another London club is another

If he still has any love for Chelsea, he has to reject that job..

Both sides of the argument have good points, opinion is important. In truth Chelsea have moved on since Mourinho. His legacy is likely to be further tarnished by becoming Spurs’ boss, but he’s a free agent and the job would make sense to him due to his personal circumstances, as he still owns property in London.

Managing Tottenham will be a huge challenge for Mourinho. Especially as Daniel Levy is not known for spending money. Maybe the Tottenham chairman will finally loosen the purse-strings.

It’s a little surprising Mourinho wouldn’t consider Bayern Munich as a better option. The Bundesliga giants dominate German domestic football, and spend without thought. Having managed in Portugal, England, Spain, and Italy, it would be a fresh challenge for the former Real Madrid boss.

From a Chelsea point of view, the club have moved on since Mourinho. The buzz at Stamford Bridge far outweighs a former much-loved manager taking over at a rival. The Frank Lampard revolution is in full swing. Long may it continue. Especially when The Blues face Tottenham on the 22nd of December.