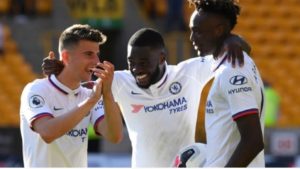 It’s been a good week for Chelsea’s young crop of players away on international duty.

At senior level, Tammy Abraham scored his first goal in England’s 7-0 win against Montenegro. Coming on in the 57th minute, it was the 22-year-olds 12th goal of the season. It was a typical strikers finish, with the youngster arriving in the box to fire home. Mason Mount also started the game, playing 70-minutes.

The Three Lions second match of the week saw them face a trip to Kosovo. A game in which two other young Blues figured. Callum Hudson-Odoi, back in the squad after an Achilles tendon injury, played for 58-minutes. In truth it wasn’t the best performance from the 19-year-old, but he looks to still be searching for full fitness following the injury.

Fikayo Tomori also made his long-awaited debut, coming on in the 84th minute. The appearance now means the 21-year-old is ineligible for Canada and Nigeria. Tomori was born in Canada, and had represented them at youth level. Nigeria were thought be interested   due to his parents being from the country.

The highlight of the night was Mason Mount netting his first international goal. The Blues midfielder came on in the 72nd minute, scoring  in injury time, to secure a comfortable 4-0 victory for England. The goal came about after a Kosovan error. Mount finishing from 12-yards.

At under-21 level, Reece James, Marc Guehi and Conor Gallagher all played 90-minutes in a 3-0 win in Albania. It was Gallagher who stole the show with a fabulous finish from the edge of the box.

Chelsea’s young star is reportedly a Real Madrid target
“It’s a club I love deeply” – What does the future hold for Chelsea striker?