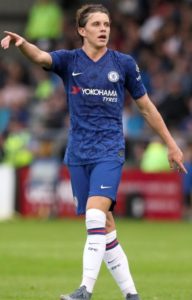 Marc Guehi, and Billy Gilmour have also made appearances as they stake a claim for more senior action.

The Blues also have a host of young stars out on loan, to further their development, in a hope they can reach their long-term ambitions of playing a major part at Stamford Bridge in the future.

One such loanee is Conor Gallagher. The 19-year-old has been at Chelsea since the age of eight. Dreaming like many other youngsters that one day he will be running out at Stamford Bridge as part of the first-team.

This season, Gallagher is spending the season on loan at Charlton Athletic. The newly promoted Championship club are currently sat in mid-table after a bright start to life back in English football’s second tier.

Gallagher has made a huge impact, scoring five-goals, and adding two assists, to make himself a fans favourite at The Valley.

Gallagher was called up for the first time for England under-21 action last month. Making his debut as a substitute in a 5-1 victory against Austria.

This time round the Epsom-born midfielder was to make his full debut in a qualifying match in Albania. The youngster didn’t disappoint.

With Half-time approaching he fired home from the edge of the box to give England a 2-0 lead. The Three Lions went on to win 3-0, a win that keeps them on course for the under-21 European Championships in 2021.

I'm not even reactionary, I just know he is replacing Barkley next season.

He scores when he wants

Wow, what a goal from Conor Gallagher. Weak foot rocket. Some season he’s having.

Assisted by Foden, who is playing a lot on the right w/ Reece James. Talk about two players who are too good for U21 football.

Chelsea ace Conor Gallagher has been sensational so far this season… #CFC https://t.co/skAabObJoe

It’s still early days for Conor Gallagher, but he is certainly showing what talent he has to offer. There is no reason why Chelsea fans won’t see the youngster following in the footsteps of others, and pulling on a blue shirt in the near future.

For now he has to carry on working hard, and keep putting in top performances during his time with Charlton.

Agent claims Chelsea made audacious bid for Serie A right-back
Two young England stars coming in, and Frenchman to leave? – Chelsea transfer rumours round up