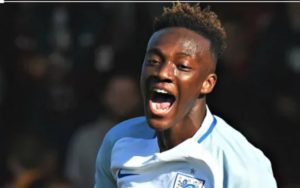 Another milestone has been accomplished by Chelsea’s big striker. Coming off the bench for Harry Kane with 34-minutes remaining, the stage was set for Tammy Abraham to break his duck at full international level.

Making only his second appearance for The Three Lions, the Chelsea academy graduate duly obliged. Arriving in the six-yard at the right time, with six-minutes remaining. Abraham poked home a Jadon Sancho cross to complete a 7-0 rout of Montenegro. The win confirmed England’s qualification for Euro 2020. A tournament that the 22-.year-old will hope to play a large part in.

The goal was met with approval by Blues fans, who took to social media to give their opinion…

A dozen for the season and his first goal for England. ???

That Run from Tammy Abraham to position himself for the delivery from Sancho for is 1st 3 lions goal
My Striker ?? pic.twitter.com/Svauvtc3oW

#Tammy Abraham has scored his first senior international goal for @England. What a beautiful assist from Sancho.

His 12th goal of the season for club and country. pic.twitter.com/HmXdmSKSpq

The strike was Abraham’s 12th-goal of the season, adding to his impressive 11-goals for Chelsea. Ten of those have been in the premier league, where Abraham sits second in the top-scorer charts, only one between Jamie Vardy.

Abraham will be hoping to get more minutes under his belt as England travel to Kosovo for their final qualifying match against Kosovo. With the hosts unable to qualify, following a 2-1 defeat in the Czech Republic, it would be a great opportunity for Gareth Southgate to give Abraham his first start in an England shirt.

Tammy Abraham has proven time and time again that he can step up. It’s not going to be easy to be included in England’s starting XI. Harry Kane is his direct competition for a place, and of course he’s also captain.

However, Tammy has a bright future in the game. His record at Chelsea has seen him step up under Frank Lampard, and now he has announced himself on the internatonal stage.