Alvaro Morata: ‘I had stopped enjoying it’ – Spaniard reveals reasons for leaving Chelsea 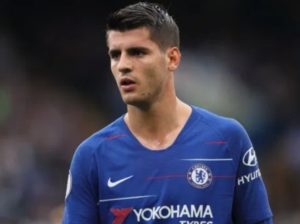 Alvaro Morata didn’t have the best of careers at Chelsea. Although, The Spanish international started life with a bang, when he first arrived at Stamford Bridge during the summer of 2017.

Scoring on his premier league début in a defeat to Burnley, Morata went on to score six-goals in as many games. The highlight being a hat-trick at Stoke City.

However, as the season progressed, the Spaniard struggled to regain his form, ultimately netting a total of 15-times, in 48-appearances.

Having cost £58m, a lot was expected of the former Real Madrid man. During his second season, fans were hoping to see the early form of the Spaniard return. Unfortunately, it wasn’t to be. Scoring nine-goals, in 24-games the body language of Morata made it obvious he didn’t want to be at the club any longer.

A January loan move back to La Liga was the best option for everyone involved. Atletico Madrid would be the launch pad for Morata to regain confidence and prove his worth.

Now the dust has settled, Morata has spoken of how he felt during this time in London. Speaking to COPE (Via The Metro), the former Juventus star explained that he didn’t feel like he was one of the team. He said:

“In some games in England I felt like when my teammates saw me unmarked, I knew they thought I wouldn’t do anything good with the ball”.

He felt isolated with no hunger to interact with others.

“I didn’t feel like doing anything, leaving home, talking to people, nothing”.

Morata admitted the pressure of being at Chelsea got to him. Leading to seeking a move away from West-London…

“I told my wife that we were going to go as far away as possible in January because I couldn’t deal with this pressure”.

Morata had other options, including Chelsea wanting him to stay. But the lure of a move to Atletico was to good to turn down. He added:

“Atletico came up, I had six or seven big offers and Chelsea wanted me to stay, but I decided to do what I’d been looking to do for various summers”.

Ultimately it has all turned out to be a happy ending for all parties. Morata will be recognised by many as a flop. But from a Chelsea point of view, they are due to recoup the money spent when Atletico make the deal permanent next summer. So it’s very much a case of no harm done.