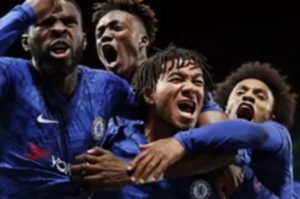 A crazy night at Stamford Bridge that nobody could have predicted. An early own goal followed by an early penalty set the tone to what will go down as one of The Blues most memorable nights in recent history.

Ajax looked in control during the first-half, going in at the break with a 3-1 lead. Ajax had taken the lead through a Tammy Abraham own goal after just two minutes. However, Chelsea hit straight back with Jorginho converting from the spot after Christian Pulisic was upended.

Ajax though, regained the lead through Promes in the 20th minute, before Kepa Arrizabalaga was unlucky enough to see a shot hit the bar, and then cannon in off his face for 3-1. It came as no surprise that Chelsea fans weren’t pleased with the first half display, many sharing their anger on social media.

Half-time
Chelsea looking leggy & disjointed from back to front & struggling to cope with  Ziyech & Promes.
– defensive set piece prep not good
– Azpi has struggled
– Kovačić a plus
– Pulisic a threat
– Jorginho penalty king
– Frank needs to change things up swiftly#cfc#CHEAJA

This game hasn’t been as bad for us as the scoreline suggests.

But the entire back four plus Kepa have not turned up in the first half. Changes needed tactically after half time! (1-3)#CHEAJA #CFC #KTBFFH #UEFAChampionsLeague

Awful 1st half!!!! We need to stop making mistakes and concentrate on scoring more goals in the 2nd half!!

Chelsea started the second half on the front foot, but it the  eredivisie champions who increased their lead. Van der Beek firing home to make it 4-1. You’d be forgiven for thinking that was that if you’re a Chelsea fan. Damage limitation the aim of the game?…

No, Chelsea just would not lie down. Cesar Azpilicueta fired home from close range and suddenly, maybe just maybe there was a way back into it.

Then the big turning point. Daley Blind fouled Tammy Abraham, only for the referee to wave play on with Chelsea having the advantage. The ball struck Joel Veltman on the hand, leading to a penalty being awarded to The Blues.

Then pandemonium struck… Blind, for the challenge, and Veltman, for the handball both saw yellow. However, both had already had their names taken, and so referee, Gianluca Rocchi had no option but  to send both players off for an early bath.

Jorginho duely tucked away the penalty, and suddenly the tide had turned. A feeling of belief was growing in West-London.

The moment that sent Stamford Bridge into raptures was still to come. Kurt Zouma saw his header rebound back off the crossbar, and there was half-time substitute Reece James to fire home, 4-4!!!!

Imcredibly there was still more drama as Azpilicueta found the net for the second time, only for VAR to rule out his effort due to a handball in the build up.

As the final whistle blew, there was an air of frustration as the night had ended. Many could have watched the game continue for the rest of the evening. Although sometimes it’s nice to get off the emotional rollercoaster that makes football so great. Drama, passion, good luck, bad luck, and disbelief. This fixture had it all.

At full-time, Chelsea fans reflected on an astonishing night.

• WHAT A GAME
• Jorginho with 2 excellent penalties
• Brilliant decision to bring on James for Alonso
• Reece James has a CL goal! He was superb all half
• Frustrating last 15 minutes, we should have won
• CL Football at its best ?#CHEAJA #CFC pic.twitter.com/fqbaFYeg8Q

I can't be arsed to check TL.

If you didn't love that. Are you even Chelsea? ?#CHEAJA

Chelsea came from 4-1 down to draw the game 4-4! What a crazy night at Stamford Bridge! #CHEAJA #CFC pic.twitter.com/tJH8apqSxl

This game of football has been an emotional roller coaster ??? #CHEAJA #CFC

The result leaves Chelsea level on 7-points with both Ajax and Valencia. Lille are bottom with only a solitary point to their name.

Next up see a huge crunch tie that could decide Chelsea’s champions league fate. A trip to Valencia on Wednesday 27th November. A Blues victory would see qualification to the round-of-16 confirmed.

‘He’s been a massive influence for me’ – Chelsea youngster heaps praise on Frank Lampard
‘Immense talent’, Remember the name’ – How some Chelsea fans have reacted to Reece James’ Champions League performance