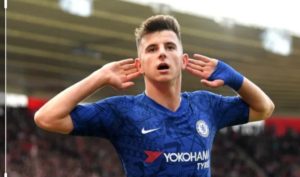 Chelsea midfielder Mason Mount has spoken of the influence Blues boss Frank Lampard has had on his career so far.

The 20-year-old spent last year on loan at Derby County under the tutelage of the Chelsea legend.

Talking ahead of this evening’s champions league clash with Ajax, Mount was quick to praise The Blues all-time top goalscorer. Speaking to a packed press room at Chelsea’s Cobham training base, Mount was quick to acknowledge his boss. He said (via chelseafc.com):

“He’s been brilliant, I’m learning off him every day trying to perfect my attacking and defending and there’s no better person for me to work under”.

The England international also referred to their time together in the East-Midlands. Citing an advantage being gained due to having an understanding to how the boss works.

“He’s been a massive influence for me, Working under him last season, knowing how he likes to work and how he likes to play, that’s probably given me and Fikayo that advantage coming back to Chelsea”.

Comparisons can be drawn between Mount and Lampard. Although the youngster plays further forward, he has a penchant for goals, similar to his manager, having scored 11-goals at Derby, 13-goals whilst on loan at Vitesse Arnhem in previous seasons.

So far this campaign, Mount has four goals, and two assists to his name. So still has a long way to go to match Lampard’s record of regularly netting at least 20-times per season.

The academy graduate has self-belief in his own ability after his rapid rise to becoming a first-team regular. He added:

“I was always ready, I’ve been at the club for a very long time so you’ve got to have belief in yourself and be ready for that opportunity”.

Mount is also confident Chelsea can go on and win silverware, citing the togetherness being felt within the squad as a major factor.

“We want to win trophies and we want to be top of the league. We’re so tight as a team, the bond is so good and we’ve got that focus and togetherness that we need to win trophies. That’s our next goal, to win a major trophy. We just need to keep getting better and better, which is what we’ve shown over the last couple of weeks”.