Linked with a move away, now nominated for Premier League player of the month

Chelsea winger Willian has been shortlisted for October’s Premier League player of the month award. 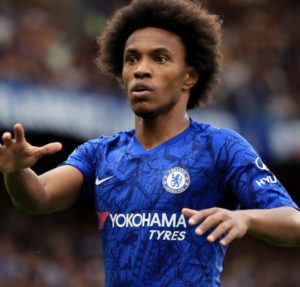 The much-maligned Brazilian has been in great form throughout the month. An assist in a 4-1 victory at Southampton, was followed with a goal and an assist in another four-goal haul at Burnley. The Blues running out 4-2 victors last weekend. The former Shaktar Donetsk man also netted the opening goal in the Champion’s League success at Lille.

The Brazilian has been under increased pressure this season, following the arrival of Christian Pulisic. Missing the start of the season with a hamstring injury, Willian made a gradual return from the bench. Since returning to the starting line-up, his form has improved with every game.

It has been an impressive turnaround by The Blues winger following continued speculation about his future in West London. Rumours of interest from Barcelona and Juventus have circulated for some time. A recent quote in his homeland by Esporte Interativo, has shed some light on the situation. He said:

“I think I have a lot of wood to burn here in Europe. I have a market. I’m very happy here at Chelsea.

Of course my contract is ending now, at the end of the season it’s over. But I’m happy at Chelsea and I plan to stay out here”.

Willian will be expecting to be in line for a start this afternoon as The Blues travel to bottom-of-table Watford. Lampard stated during yesterday’s pre-match press conference that competition is healthy with four wingers to choose from. Reported by Chelsea’s official Twitter account, Lampard said:

“It’s a tough decision this weekend over who to select from Pulisic, Hudson-Odoi, Willian & Pedro, but it’s competition which means players know they have to perform”.

To vote for your choice of October’s best player, simply click on the link below and follow instructions.