Marcos Alonso has looked back to his best in recent weeks. Well, until Wednesday night when he gave away what most would describe as a soft penalty. Doing so has led to knives being out with regards to the Spaniards future at the club. (Read here). The burning question is… Do Chelsea need a new left-back? 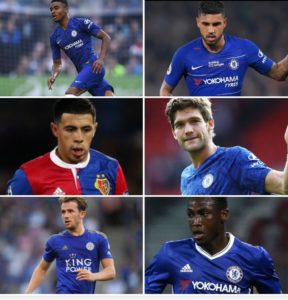 Alonso performed wonderfully under Antonio Conte. The Italian employed a back five/three centre backs, playing the former Real Madrid man as a wing-back. Alonso thrived within that system, getting forward to not only support the forwards, but also chip in with goals himself. However, the defensive aspect of his game has always been called into question.

The Italian was brought in ahead of Maurizio Sarri’s season at the club. The Brazilian born full-back has a good engine on him. Getting forward well he also gets back quickly and is defensively more astute than his rival. The downside is his Chelsea career has been hampered by niggling injuries. Another of which has seen him miss the last few weeks after he started the season as Frank Lampard’s  first-choice.

The youngster made his debut against Grimsby Town in the Carabao Cup. Still only 17-years-old, the Dutchman has a bright future and plenty of potential. However, he is exactly that… The future.

The Ghana international joined The Blues in August 2015. Making 23-appearances in what was a poor season for Chelsea left many fans split on whether the former Augsburg left-back was worth the £14m the club spent on him. A loan move back to The Bundesliga, to Schalke. After a decent first season the deal was extended for a further 18-months. However, a series of long-term injuries have hampered the Ghanaian’ s career. A short spell at French club reims, was followed by a move to La Liga club Real Mallorca. More injury woes have kept him out since mid-September.

With The Blues still banned until next summer from adding to their squad. It will be a long wait to address the issue.

One left-back that’s been persistently linked is Leicester City’s Ben Chilwell. The 22-year-old first broke in The Foxes squad at the back end of 2016. He has since become a regular and also forced his way into the England set-up.

The Paraguayan was linked with Chelsea recently by 90min.com. The South American has starred for Swizz club FC Basel since moving to Europe in 2016. Still only 21, he has been capped by his country and has potential to go on and become a top class left-back. The report suggests he would be an option should Chelsea fail to capture Chilwell.

Lampard has favoured Emerson earlier in the season. It will be interesting as to whether he continues to favour the former Roma man once he’s back to full fitness, or feel that Alonso is now back as first choice left-back. Come the summer Lampard will have had the whole season to assess both players, but on current form will surely look towards the transfer market for a replacement.

150 transfer breaches – Staggering amount of rules broken that led to transfer ban
Linked with a move away, now nominated for Premier League player of the month