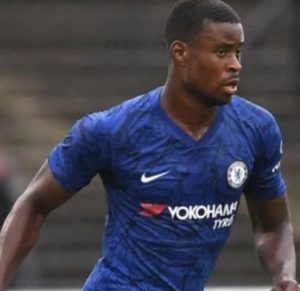 Many Chelsea fans wouldn’t have known the name Addji Keaninkin Marc-Israel Guehi, at the start of season. If you follow the youth and academy set-up you will know he has bags of potential.

Last night was a disappointment for Blues fans. A 2-1 Carabao Cup defeat to Manchester United ended a 7-match unbeaten streak that stretched back to the last round of the Carabao Cup, a 7-1 victory over League Two club Grimsby Town.

It was at the start of that run that Guehi made his debut. The 19-year-old gave an assured performance, but wasn’t truly tested. Last night was different challenge as he came up against a strong Manchester United line-up. United opted to not make as many changes as Chelsea, but Guehi refused to be overrun by the challenge in front him.

The 19-year-old certainly can’t be blamed for either of the goals, and gave a composed performance. Not afraid to get stuck in, the Ivorian-born defender battled away all evening winning many duels and tackles when required to frustrate the United attack.

Guehi has been at Chelsea since the age of nine. Like other youngsters making their mark, Callum Hudson-Odoi, Tammy Abraham, Mason Mount and Fikayo Tomori, Guehi is blue through and through.

At international level he has played for England at every level up to under-21. Captaining the under-17’s to the European Championship final, he also scored in the World Cup final success for the same age group. He still remains eligible to play for his motherland, so a situation similar to that of Abraham and Tomori may yet be on the cards.

From a defensively point of view, Chelsea looked well stacked going forward. Tomori emerged after a year away on loan at Derby. Ethan Ampadu, currently on loan at RB Leipzig, can play centre back as well. Andreas Christensen is still relatively young at 23-years of age.

The future is certainly bright as far a defenders are concerned. At fullback, the recent return of Reece James gives The Blues another option on the right. Also 17-year-old Dutch youngster Ian Maatsen saw his debut against Grimsby.

Overall Chelsea are going through somewhat of a transition right now. The trust in youth policy by Frank Lampard is causing a buzz around Stamford Bridge, long may it continue.