Chelsea will be eyeing a fifth-straight victory across all competitions when they entertain Newcastle United in the Premier League on Saturday. The Blues have succumbed to just one league defeat since the dreadful beginning to the season but they can’t take the Magpies lightly, considering they have already secured shock 1-0 triumphs over Tottenham Hotspur and Manchester United this term.

Kepa Arrizabalaga has been an ever-present figure for the Premier League and Champions League duties this season and the Spaniard is expected to feature between the sticks on Saturday. For the defence, Andreas Christensen remains a genuine doubt with the hamstring injury picked up on international duty while the game may come too soon for Antonio Rudiger (groin) and Emerson (hamstring), who are aiming to make their injury comebacks. In this case, Lampard may revert to the same defensive combination from the previous league game.

In the centre of the park, there are likewise doubts regarding the fitness of N’Golo Kante and Mateo Kovacic, who picked up minor injuries on international duty. Lampard will provide an update over the duo on Friday but there is a fair chance that neither of them would be risked for the weekend. In this case, Jorginho should feature as the sole holding midfielder with Ross Barkley and Mason Mount playing ahead of him.

In the attack, Callum Hudson-Odoi should be handed with his second league start on the bounce. The attacker has been in sparkling form with a goal or an assist in each of his four appearances this term and he was recently impressive for the England Under 21s with a couple of goals in the 5-1 drubbing of Austria. The 18-year-old should feature on the left side of the attack.

Elsewhere, Willian seems an automatic choice under Frank Lampard for the right-wing position and the Brazilian has certainly earned the spot. The 31-year-old has made a goalscoring contribution in the past three appearances for the Blues. Upfront, Tammy Abraham is another undisputed starter and the striker has the opportunity to register his 10th goal  in what has been a sublime breakthrough season under Lampard. 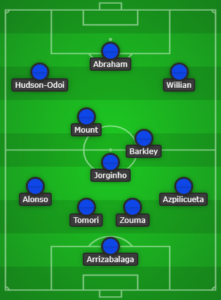