Chelsea will be eyeing a fourth straight win across all competitions when they tackle Southampton on the road on Sunday. The Blues are currently on 11 points after the opening seven games of the Premier League campaign and a victory over the Saints could see them break into the top four, should the other results go their way.

Blues boss Frank Lampard has already hinted that he will set the formation based on the requirements for every single game. The 41-year-old went with three at the back for the Lille clash in midweek but he should revert to the traditional 4-2-3-1 setup for the South Coast trip.

Kepa Arrizabalaga has been consistent with his performances between the sticks this term and he has not been rewarded in the form of clean sheets with the vulnerability in the defence. The Spaniard is expected to start on Sunday and has the chance to register his second shutout of the campaign.

In the defence, Cesar Azpilicueta is likely to revert to the right-back position after featuring in a three-man backline in midweek. In this case, Andreas Christensen could return to the starting XI to partner Fikayo Tomori in the central defence. Marcos Alonso should continue to deputise for the injured Emerson at left-back.

Jorginho has been an undisputed starter in the centre of the park and there are no doubters regarding his involvement at St Mary’s. N’Golo Kante played through the entire 90 minutes against Lille unscathed and the Frenchman will definitely get the nod over Mateo Kovacic in midfield, provided there are no fresh fitness concerns.

In the attack, Willian, Mason Mount and Tammy Abraham are certainties to start. The other attacking spot could be taken by Callum Hudson-Odoi, who has been in superb form since his injury comeback with one goal and two assists in less than 180 minutes of action. 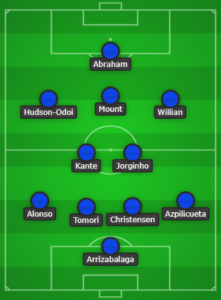