Chelsea will be aiming to register their first points of the Champions League campaign when they face Lille on the road on Wednesday night. The Blues suffered a 1-0 loss to Valencia at Stamford Bridge during the opening group stage game and manager Frank Lampard will be aiming for a better performance from his players at Stade Pierre Mauroy as they seek to keep up with Ajax and Valencia in the top two race.

Emerson (thigh), Ruben Loftus-Cheek (achilles) and Antonio Rudiger (groin) are out of contention for the game through injuries but Kurt Zouma, Olivier Giroud (both illness) and N’Golo Kante (hamstring) are likely to feature after returning to training in the lead up to the game.

Kepa Arrizabalaga has been ever-present for the Premier League and Champions League duties this term and he is expected to start in goal. The Spain international will be aiming to secure back-to-back clean sheets.

In the defence, no changes are likely. Cesar Azpilicueta should continue to get the nod at right-back over Reece James with his experience and captaincy while Marcos Alonso should deputise for the injured Emerson on the left side of the backline.

At the heart of the defence, Fikayo Tomori has become a regular under Lampard since September and the manager has personally acknowledged that the Blues graduate will remain in contention for a starting spot even when Rudiger returns to the mix. He is likely to be accompanied by Andreas Christensen once more.

In the centre of the park, Jorginho and Mateo Kovacic have been regular picks since the beginning of the campaign and they are bound to keep their places. Lampard has stated that only a late fitness test will determine Kante’s inclusion and the Frenchman may not be risked from the starting XI.

Instead, Mason Mount could drop into the central midfield with the freedom to shift into the number 10 role when the Blues are on the attack. Elsewhere, Callum Hudson-Odoi could be handed with his first Champions League appearance of the season.

The young winger made an impressive cameo against Brighton last weekend where he provided the assist for Willian’s goal and he could feature in his preferred left-wing position. In this case, Willian should play on the right side of the attack with Tammy Abraham leading the line.

How Chelsea could line up against Lille.. 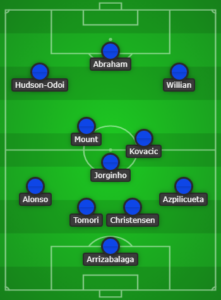