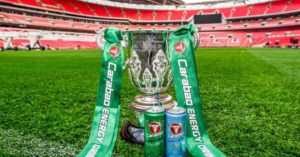 Tonight’s game sees us back against Spurs for the 2nd leg of the Carabao Cup.

Plenty are kidding themselves that with Kane, Alli and Son all out, our players will take the best opportunity they’ll get to overturn the 1-0 deficit from the first leg – I’m not buying that though. We might only have lost to them by the dodgiest of margins in the first leg but they have already beaten us comfortably in the league, as did Arsenal at the weekend.

These are games former Chelsea sides would have been well up for, but the current players are a different breed altogether and they’re as well-led as the Labour party right now. Whilst the world and his wife have been reliably informed the problem is they’re a difficult group to motivate, William Hill won’t be losing any sleep over the chances of Sarri sending out exactly the same side to play exactly the same way.

After publicly having a go at the players at the weekend, going into tonight’s game, Chelsea head coach Maurizio Sarri says “I think we need to react on the pitch. The rest is nothing. We discussed with the players how to try to improve the approach, the motivation, the determination, so we are trying to change something in training, in pre-match, in everything. I think we all have to react on the pitch, of course.”

Tottenham manager Mauricio Pochettino meanwhile, says “I am so optimistic. We are going to prepare for Chelsea, try to find solutions. Try to be solid, aggressive, offensive and keep our identity. Of course it’s going to be tough. I don’t say we’re going to win easily on Thursday. But we are going to try. That is the most important thing and I know that afterwards I will be happy because the squad we have is going to give their best to be in the final.”

For Chelsea, Ruben Loftus-Cheek (back) is injured. Alvaro Morata is being moved on in favour of Gonzalo Higuain, who didn’t sign in time to play tonight, so Sarri will undoubtedly opt to play our best player out of position yet again.

For Tottenham, Dele Alli (hamstring) and Harry Kane (ankle) are out, whilst Heung-min Son is on international duty. Lucas Moura (knee) and Moussa Sissoko (groin) could return.