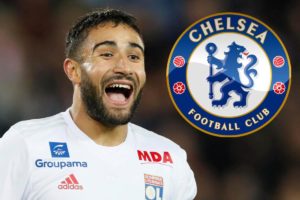 We’ve certainly sprung into action in the past couple of days in the transfer window. Following a very quiet window involving the signing of only Jorginho from Napoli, Chelsea splashed out £71 million to bring in goalkeeper Kepa Arrizabalaga from Athletic Bilbao, as a replacement for the outgoing Thibaut Courtois. We have also agreed a loan deal for Real Madrid’s Mateo Kovacic, adding more depth and experience to the midfield.

Now, on transfer deadline day, there could be more action set to go down at Stamford Bridge. The window closes three weeks earlier this year, and teams are scrambling to submit late bids to try and bring in their targets.

The biggest name linked with Chelsea at the moment is Lyon’s Nabil Fekir. The Frenchman, who didn’t play against us in the pre-season friendly on Tuesday, did travel to London with the squad. He was part of the French squad that won the World Cup last month, but didn’t feature very heavily. He was rumoured to be on his way to Liverpool earlier on in the summer, but The Reds were unable to agree a deal with Lyon.

According to Italian journalist Alfredo Pedulla, we are still in the process of negotiating a deal for the 25 year-old. The Ligue 1 outfit are reportedly asking for €80 million, with Chelsea ready to pay only between €55-€60 million at the moment. In a race against time, we may even end up offering one of our players on loan to Lyon, even though that’s unclear at this point. The situation should become clear as the clock ticks closer and closer to midnight in the UK.

Fekir has played as an attacking midfielder, a winger or a forward for Lyon. A left-footer who loves to cut inside, he could offer the perfect solution for Chelsea on the right wing. With Fekir on one wing and Hazard on the other, we would be lightning quick on the counter. This would also fit Maurizio Sarri’s system very well, as both the players will offer plenty of goals. While Hazard scored 17 times in all competitions last season, Fekir found the back of the net on 23 occasions.

Zouma to United, Batshuayi to Valencia?

Manchester United are frantically in search for a centre-back. Names like Toby Alderweireld, Harry Maguire and even Diego Godin have been linked with a move to Old Trafford, but it looks like it’s going to either be too costly or too difficult for Jose Mourinho to lure them away.

According to L’Equipe, as relayed here by Alfredo Pedulla, Chelsea’s Kurt Zouma is also now being mentioned. The Frenchman has struggled to find his form back after an anterior cruciate ligament injury in his knee in a game against United themselves in early 2016. He was on loan at Stoke City last year, but it is difficult to see him making too much of an impact at Stamford Bridge this season.

Another one of our players being linked with a move away is striker Michy Batshuayi. The striker, who spent the second half of last season on loan at Borussia Dortmund, is now likely to move to Spain for another loan spell. According to Football Espana, Valencia have emerged as front-runners to secure his signature, ahead of Sevilla, who are also in the running.

This move could backfire on us though, with Alvaro Morata looking completely out of form in pre-season. Pinning all our hopes on Olivier Giroud may not be the best thing to do either, as the Frenchman is not exactly what you would call a prolific goalscorer. Tammy Abraham is another option, but the youngster is unproven and inexperienced at the top level. Batshuayi scored 9 goals in 14 appearances in all competitions for Dortmund last season, and deserves his chance to prove his worth under Sarri.

What will Mateo Kovacic bring to Chelsea?
Three senior Chelsea players to watch out for under Frank Lampard next season