Chelsea slumped to their fifth consecutive defeat in a Community Shield game, as Manchester City comfortably beat us 2-0 on Sunday. An old foe Sergio Aguero scored both goals, one in each half, and even had chances to complete his hattrick. City completely played us off the park, having a total of 18 shots on goal compared to just 5 from Chelsea.

There were clear signs of newness, unfamiliarity and also fatigue, as Maurizio Sarri looks to enforce his style of football on his acquired group of players. On the opposite touchline, Pep Guardiola’s men already look like big favourites to retain their Premier League title. The sense of purpose and confidence with which they are playing is indicative of the money, time and faith that the club bestowed on their manager. They are now reaping huge rewards which look set to be long-term. 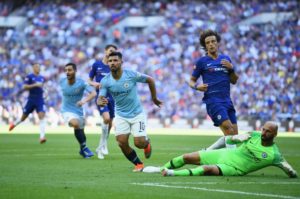 We set up pretty much as expected, in a 4-3-3 formation with Jorginho, Ross Barkley and Callum Hudson-Odoi all starting. The high-pressing style of play was evident right from the start, but there were also clear indications that it was going to take some time before all the individuals really set into the system. We shaded possession in the first half, playing out from the back and attempting to move the ball quickly. However, we didn’t manage to really do that with much success.

This is very early both into the season and into Sarri’s tenure to really be making judgments with absolute certainty. But here are three major takeaways from yesterday’s defeat:

1) The back 4 needs reorganisation

There were big problems in defence yesterday. We set up in a back four for the first time in almost two years, with Cesar Azpilicueta, Antonio Rudiger, David Luiz and Marcos Alonso. Azpilicueta, usually so reliable, struggled with his positioning earlier on and was getting sucked into the middle again and again. Alonso, who played in the left wing-back role under Antonio Conte, was making forward runs and then not tracking back. This was exactly what led to the second City goal, which came from a City counter-attack. Alonso was in a forward position, but made no effort to get back as Aguero was played in for a cool, first-time finish.

David Luiz was also getting caught out of position time and again, and the first goal was a result of Rudiger moving across to try and cover for him.

We need a rehaul at the back, as yesterday’s setup looked vulnerable almost every time City got into our half. Andreas Christensen in for Luiz, and Emerson Palmieri in for Alonso could be viable options.

Jorginho didn’t have a game to remember, in his first competitive appearance in English football. The Italian found that the pace of the English game offered him not time at all to dwell on the ball, and he was caught out in possession on several occasions.

N’Golo Kante’s absence was very apparent in midfield, as we simply didn’t have the legs to cope with City. Jorginho and Cesc Fabregas aren’t exactly full of running, while Ross Barkley played in a more advanced position. The Frenchman’s return will be met with a huge sigh of relief by everyone at the club. His energy, tackling and general omnipresence will provide the kind of shield in front of the defence that was completely lacking yesterday.

3) Where are the goals going to come from?

Once again, Alvaro Morata put in a performance that can best be described as “insipid”. The Spaniard had one shot on goal in the first half, but struggled to really make a mark on the game before being replace on the hour mark by Tammy Abraham.

Along with Morata and Abraham, we will also have Olivier Giroud and Michy Batshuayi returning to the squad. However, none of these names really fit the bill of a proven Premier League goalscorer that can lead the line on their own. Giroud does to an extent, but the Frenchman isn’t exactly a direct hit for Sarri’s fluid and fast-paced style of play. The manager asked for Gonzalo Higuain, and the club wasn’t able to deliver.

We can’t be depending on just Eden Hazard and Willian for goals. Watching Sergio Aguero score his 200th and 201st goal for City yesterday was a sickening sight in many ways. It’s not just the fact that we not have a poacher like him in our team at the moment. We could have actually signed the Argentine back in 2011 ahead of City, but instead settled for Fernando Torres.