Why Edin Dzeko to Chelsea doesn’t make much sense

Diego Costa’s exit was possibly the worst thing that happened to us last summer. We’ve talked a lot about our defence and midfield, but the Spaniard’s ability to single-handedly win us crucial points has what has been most sorely missed. We signed Alvaro Morata for 58 million, but he hasn’t really set the world alight despite a very good start. Olivier Giroud came in from Arsenal, as Plan B, in January but has now relegated Morata to the bench. This is not because he has been terrific, but because the latter’s form has dropped like a stone.

It’s almost like we’re back at square one, heading into the summer transfer window. The lack of a consistent goalscorer has seen us drop to 5th in the league, and there is the real threat of missing out on the Champions League next season. Attracting a world-class marksman in the summer is going to be a challenge, and we’re almost surely going to end up overpaying.

Former Manchester City striker Edin Dzeko is on his way to Stamford Bridge, according to a report by El Gol Digital. last Saturday. The Bosnian, who recently celebrated his 32nd birthday, scored twice at Stamford Bridge earlier this season for his current club Roma. He has a phenomenal goalscoring record in Serie A, but I fail to see how he can be a long-term solution for us right now. 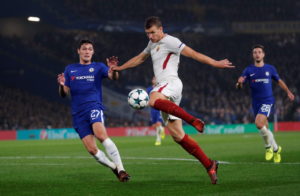 Firstly, his form this season has declined dramatically. Last season, he netted 39 times in all competitions. This year, he has only 17 thus far. We have paid the price several times in the past for pinning our hopes on strikers on the decline (eg. – Fernando Torres, Claudio Pizzarro, Radamel Falcao). It would be naïve to do it once again.

Dzeko was close to joining us in January, along with Emerson Palmieri who did end up coming to Stamford Bridge. Judging by his previous time in the Premier League, many fans did heave a sigh of relief that he didn’t. His record at Man City was by no means poor. In fact, he was very prolific based on the limited playing time he got. But the fact is that he didn’t lead the line on his own at the Etihad, and had Mario Balotelli and Sergio Aguero for company. The best tally he had in the league was 16, in a team completely laden with attacking talent. Our style of football simply doesn’t allow strikers to bang in goals for fun, and it is very unlikely that Dzeko will be able to make such a transformation in his style of play at this stage in his career. His hold-up play is certainly good, and he will be able to bring our wingers into play, but can he lead the line on his own, score important goals and play week-in, week-out amidst the ruff and tumble of the Premier League? The answer is certainly not a confident yes.

Also, with our club policy not to give more than one-year contracts to players over the age of 30, for how long can we depend on Dzeko? It would make so more sense to spend big on a younger talent. Apart from Costa, when was the last time we had a striker who easily consistently surpassed 20+ goals every year? Jimmy Floyd Hasselbaink was top-scorer in all competitions for 3 of the 4 seasons between 2000 and 2004. Since then, we hadn’t had a striker who has achieved that feat in consecutive campaigns, until Costa came along in 2014 (where would we be without Frank Lampard, eh?).