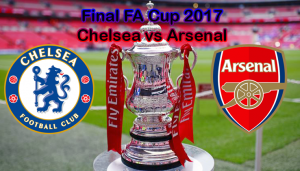 Whilst everyone else has hung their boots up for a rest before pre-season, our last game of 2016/17 sees us take on Arsenal at Wembley for the FA Cup final.
Neither of us are strangers to Wembley or FA Cup finals, although Arsenal are streets ahead with 12 FA Cups won ahead of today and a win would take them ahead of United in terms of FA Cups in their cabinet. I’m sure they’d rather have old big ears in there like the rest of us, but that won’t be happening unless they get themselves back into the Champions League again.
Anyway, onto the game and in spite of Arsenal’s history in the FA Cup, we seem to be going into it as favourites. Of course, that’ll be because Antonio Conte’s change of formation saw us get our act together after Arsenal had pulled our pants down in the league. In fact, we got it together so well, tucked the title away with breathing space.
It’s worth noting though, that Arsenal have also won eight of nine games since replicating that change and despite all the noise about injuries upsetting that balance, I suspect Arsene will be feeling quietly confident coming into this game. For Conte, this is his first FA Cup final and unlike the league, this is often anyone’s game.

MANAGER’S VIEWS
Going into today’s game, Chelsea boss Antonio Conte says of his opposing manager today “When you stay for a long time at the same team – we’re talking about a great team, not a small team – we must consider him like one of the best managers in history. He won a lot. When you stay a lot for a long time in the same team, someone can forget this. But Arsene Wenger is, for sure, a really good manager for me.
For sure, I don’t [believe] that tomorrow will be the last game for Arsene. I think he deserves to work with Arsenal because he showed, in these 20 years, he is a good manager. He did a good job. Only this season they missed out on the Champions League.”
Arsenal manager Arsene Wenger meanwhile, says “It will not be my last match because whatever happens I will stay in football. Would it be a nice farewell? No, what I want is to win the next game. I love to win and I love to do well for my club. I want to win the cup for my club. It’s not about me, it’s about us winning the trophy and giving everything to achieve it.”

SQUAD NEWS
For Chelsea, there’s no injury worries so Conte can take his pick of the crop.
For Arsenal, Gabriel is injured, whilst Kieran Gibbs (thigh) and Shkodran Mustafi (concussion) are doubtful and Laurent Koscielny is suspended, Alexis Sanchez and Alex Oxlade-Chamberlain should both be fit and Per Mertesacker could start.