Spain are firm favourites to beat Turkey and can book their passage into the second round of Euro 2016 this evening with a victory in Nice.

The defending champions were impressive in their opener except for their finishing, beating the Czech Republic 1-0.  They created 18 chances with Alvaro Morata notably the most wasteful.  Turkey went down by the same scoreline against Croatia.

Vicente Del Bosque’s side dominated possession against one of the most unfancied nations in France but need to be more clinical in front of goal if they are to win the European Championship for a third consecutive time.

Andres Iniesta ran the midfield, looking after the ball and creating a number of chances for his teammates before providing the cross from which Gerard Pique headed home an 87th minute winner.

Cesc Fabregas played the first 70 minutes alongside the Barcelona and Spain legend but it was a rather quiet day for the Chelsea midfielder who mainly played a simple passing game and wasn’t heavily involved in the 18 chances the team created.

As an attempt to find a winner in the final 10 minutes, Del Bosque threw on Pedro and Aritz Aduriz.  The goal ultimately came although neither were involved and neither found time to force Petr Cech into a save themselves.

In fact, Pedro saw very little of the ball during his brief time on the field.

Changes are expected from Spain as there’s a good chance their final match with Croatia will determine the winner of the group.  Both Spain and Croatia are expected to be on six points after today’s games.

That could put Fabregas at risk of being rested, but the Blue is very fit and Del Bosque is loyal to him.  There’s a greater chance that Pedro will start after an underwhelming performance in their opener from Nolito.  Whether César Azpilicueta has a chance to start remains to be seen as left-back Jordi Alba is very fit and Hector Bellerin is a more-likely replacement to Juanfran at right-back than the versatile Chelsea defender. 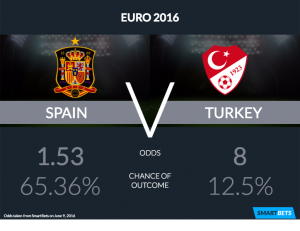 Vicente Del Bosque has no injury concerns ahead their second game.  He may want to make a couple of changes so that he has a fresh squad for Croatia in their final group game though.  Nolito was underwhelming versus the Czech Republic so Pedro may well be brought into the starting XI to play on the left.  It will be interesting to see if Alvaro Morata Artiz Aduriz start this game – one was wasteful in their opener, the other has question marks over his ability to start every game for Spain given his age.  Cesc Fabregas is battling with Thiago Alcantara and Koke to start.

Gokhan Gonul and Mehmet Topal are both doubtful to face Spain so Semih Kaya and Sener Ozbayrakli could start in their place.

13 – Spain are unbeaten in their last 13 games at European Championships.

599 – Spain have gone a record 599 minutes since they last conceded a goal at the European Championships.

Who Will Conte Move For This Summer?
Chelsea vs Everton: Blues must continue momentum after Tottenham victory