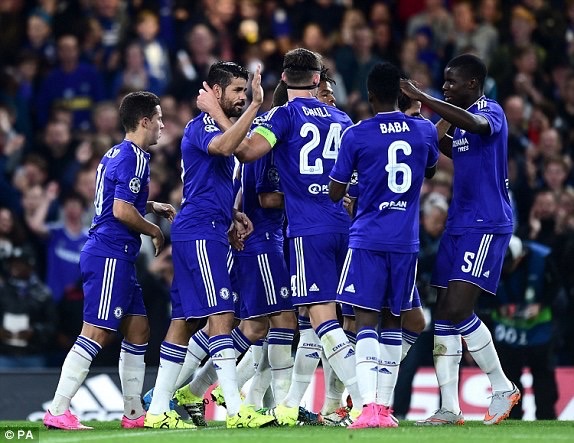 So finally we get a win again, albeit against Europe’s equivalent of Accrington Stanley but as the cliché goes – you can only beat what’s in front of you – and to be fair, 4-0 was a convincing win.

Jose rang the changes, dropping Ivanovic, JT, Matic and Costa to the bench and whether that was intended as chastisement for poor performances or with an eye on Arsenal at the weekend, it was effective.

Costa wasn’t on the bench long, with Willian clutching at his hamstring after the opener but it was good to see shades of his hunger for the ball rather than the players creeping back in. Baba and Azpilicueta together brought some much needed balance to our back line along with the improved pace of Cahill and Zouma. Oscar looked as if he might be prepared to make the most of Hazard’s loss of centre stage and even Fabregas was lively enough to poach our 4th.

As for Rubén Loftus-cheek, he’s the outstanding example of young talent we have pushing their way into contention this season and warmed our hearts after the recent cold spell.

Enough from me though, here’s the round up:

There’s a full match report from the official CFC site
Match analysis comes from Sportsmole
Jose gives his verdict to BBC.co.uk
The Independent takes a closer look at some key performances ahead of Arsenal
Goal.com give us their player ratings
And goals and highlights come from Footyroom.com