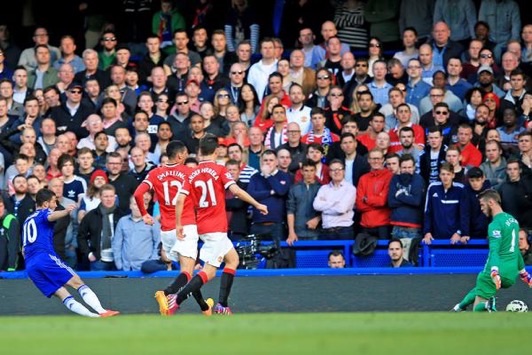 Anti-football they say? Top of the table since August, still the only unbeaten side at home, lost just 2 games all season, 10 point gap, better goal difference – anti-football my backside.
Of course, 29% possession at home is not an ideal to aspire to but then that’s not our aspiration, that’s the exception as opposed to the rule. Our aspiration is to win the title and as far as that’s concerned, yesterday’s game, possession or not, got us nearer that outcome.
So we haven’t been at our best for quite a while, every side goes through that sort of spell during the course of a season – ask yesterday’s opponents about that. Unlike them though, while we’re not at our best we are still getting the required results. We may not be doing it in a manner that entertains the masses but if it’s entertainment they want, there’s plenty of Theatres in London. Our entertainment will come in May when we lift that trophy and after we’ve done that, you can count on Jose Mourinho adding the required polish. We’ve had plenty of entertainment this season while we were establishing our place at the top of the table and dropped a few points along the way. At this stage of the season though, we have exactly the right manager in place to make sure that doesn’t happen now. If a solid defensive performance with enough savvy and quality to catch a side on the break is called for, then Jose Mourinho is the master of that sort of game.
Understandably there’s bitterness and criticism of our methods, United, in what van Gaal described as their best performance of the season, had 71% of the possession but couldn’t do anything with it. Considering the idea of the game is to dominate possession and then use it to score more goals than the opposition, failing to do that is pretty anti-football in itself. Still, if they’re happy with it who are we to criticise?
Our last couple of games have been played out without Diego Costa or Loic Remy available. We’ve played a 37 year old Didier Drogba up front on his own. One of these games was a London derby, the other was against United with their ‘best performance of the season’. We came away from those games without conceding and with all six points. Does Chelsea, or Jose Mourinho get any credit for that? Of course not, why would they? Tactics are only celebrated if they’re all pretty and shiny and wrapped in red ribbon.
The bottom line though, is that in a few short weeks Chelsea will have the shine and the polish – and this season, it’ll be wrapped in blue ribbon!

Get On Mourinho’s Bandwagon, Not His Back
Chelsea: Champions 2014/15