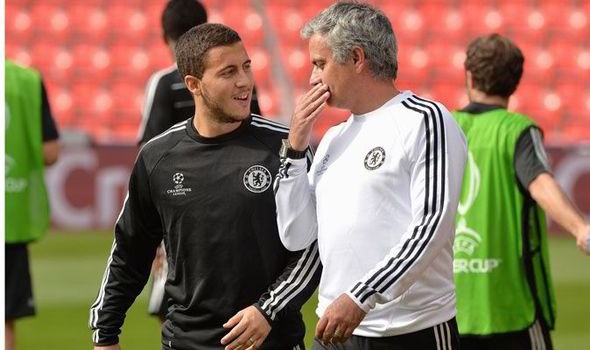 The return of Jose Mourinho at Chelsea has done many things already: it’s turned us from top four contenders to genuine title contenders; returned us to a side very frustrating to play against; turned Stamford Bridge back into a fortress, and of course, it’s given Arsene Wenger the right hump which is always a bonus.
More importantly though, what Mourinho’s return has done, is give our players belief in themselves again to start playing to their full potential. Where all too often last season they looked more dejected than determined, just six months into this season we’ve already had glimpses of the old swagger to show us exactly what Mourinho’s man management can do for a player – and nowhere is that influence more apparent than in Eden Hazard.
Not that Hazard hasn’t always looked a bloody good player since he signed for us from Lille in 2012 but this season, under Mourinho’s tutelage, the 23 year old is really developing into one of the Premier League’s biggest talents. From the naive lad who dared turn up late for a training session, only to find himself dropped from the next game, to the player who now only wants to please his manager and supporters.
That’s not all he strives for of course, because he openly admits he aspires to the sort of performances we see from the Ronaldo’s and Messi’s of this world – football, Hazard suggests is “from another planet.” And whilst his 12 Premier League goals and 8 assists so far this season are clear indicators of the improvement under Mourinho, of a more team-focused player, more tactically aware and certainly more dangerous flying down the flanks, when described as “special” and “At this moment the best young player in the world” by his manager, Hazard responds by saying “I’m very happy because it’s very pleasing when it comes from him (Mourinho). But I hope eventually people will drop the word ‘young’ because that will mean I have moved up.”
Unlike a lot of up and coming players though, you won’t see Hazard out on the town, cigarette in hand, nor will you read apologies on Twitter for marital indiscretions because even at 23, he’s clearly more focused on his wife, children and longer term career than your average player seeing how much his agent can squeeze out of clubs to field off the latest tantrum. A fact reinforced following rumours of interest from PSG, to which Hazard responded saying “When I started playing at Lille, it’s true that I fancied playing at the Parc des Princes, but I’m currently happy at Chelsea. For the moment, for PSG, it’s no. I still have a lot to do at Chelsea.” Hazard is an honest player though, and when asked about a possible future move to Spanish giants Real Madrid in the future, admitted “Which player wouldn’t be interested?”
That honesty stretches to taking responsibility for his own part in our recent defeat to City, saying “We were hoping to repeat the performance from two weeks ago (when Chelsea won 1-0) but it wasn’t the same match. Collectively we were worse because individually we were not good. I didn’t play as well and we didn’t play as well. That can happen. I would like to play like I did (in the league game) every match, every weekend, but it’s not always possible. Especially in the first half we could have done better with some phases of play. Maybe it was a lack of confidence but it was not our day.
They did not have many chances but they were able to take two of them. It was not the same game in that respect. We never managed to find a solution once they had scored. We were just not in the game.”
So, with his profile – and his worth – ever increasing, where does Hazard go from here? Fortunately for us, Hazard has a contract with us until June 2017 and his focus is as clear as ever, with the talented 23 year old insisting “We have to keep working and move on from this (City) match because we have a very important league game next weekend and that’s our focus now.”

Old Wounds Still Sore For Wenger
Do City Really Have The Edge In Title Race?