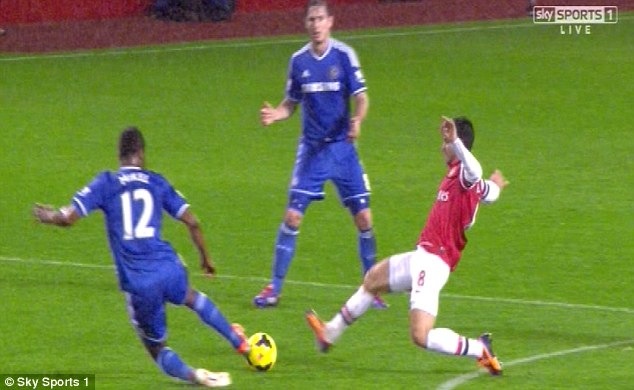 You have to love Jose Mourinho (although apparently some don’t). While Wenger was getting all bent out of shape over their ‘penalty’ appeal and Arteta’s bruised ankle (completely ignoring that challenge on Azpilicueta by the way), Mourinho was pointing out what pussies they all are.
Ok, it wasn’t our best performance (again) but going into last night’s game, given the comparison in form of both teams we probably would have taken the idea of a point. Our recent poor form won’t have escaped the boss’ attention, so in true Mourinho style, he set his stall out in the first instance to not lose – job done.
Mourinho had also paid great attention to Mezut Ozil. He knew Ozil would present the greatest risk between us getting something from that game or coming home with nothing. So, he sent the players out there to dull down that threat – anyone notice Ozil on the pitch last night? No? – job done.
Of course, aside from football, the other sport Mourinho likes to engage in when playing Arsenal, is winding them up and having gone to the Emirates, not playing particularly well yet still taking a point off Arselona, Mourinho says ‘You know, they like to cry, that’s tradition. But I prefer to say, and I was telling it to the fourth official, that English people — Frank Lampard, for example — would never provoke a situation like that. Players from other countries, especially some countries, have that in their blood. If you have contact or the opponent was aggressive, let’s go, keep going, this is English football. Foreign players are bringing lots of good things. They come here because they are talented, but I prefer English blood in football. English blood in this situation is: “Come on, let’s go”. The (Mikel) tackle is a hard and aggressive one. Football is for men or for women with fantastic attitude.
It’s true, there are other sports without contact; fantastic sports which demand a lot from the players, and I respect those sports full of champions. But no contact.
Football is a game of contact. English football, winter, water on the pitch, sliding tackles at fantastic speed. Be proud. Play with pride. If you’re hurt, OK, you’re hurt.’
Job done.