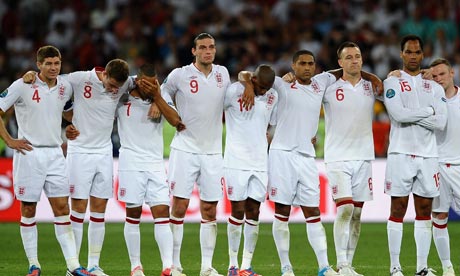 Jack Wilshere saying he thinks English players should play for England is a bit like saying professional football players shouldn’t smoke – you know it’s the ideal but there’s bound to be some who don’t agree with it, eh Jack?

I mean, in theory you’d think it was pretty black and white but in practice, once everyone from TV pundit, journalists and supporters, right down to the landlord in the local have stirred their bit in, it all becomes a bit grey – because it leaves us with the problem of the England squad not being good enough.

And it seems to me that in football, if the solution to a problem is perceived to be beyond our control, we’ll shrug our shoulders and jump on the next available ‘anti’ bandwagon – and so it is with the England set-up.  Yet it’s exactly that sort of ambivalence and dwindling patriotism when it comes to England’s national team that allows the FA to get away with doing what they need to – overhaul the country’s football infrastructure.

I’m probably telling you what you already know here but there’s a point to it, so don’t hang me when I remind you that whilst the majority of the German squad play in the Bundesliga, they have a smattering of players whose club football is outside the German league, likewise Spain.  Not so with the England squad.  Both Germany and Spain are represented on the club scene also, with two of the four Champions League semi-finalists coming from Spain and two from Germany. In other words, the best players in La Liga are Spanish, the best players in the Bundesliga are German and yet notably, the best players in the Premier League…..aren’t English.

Again, I’m probably not telling you something you don’t already know but clearly, the problem starts with the way football is viewed in England. Everyone slated Roman Abramovich for his ‘win and win now’ attitude to the game when he arrived at Stamford Bridge, the Football Manager style transfers, the impatience with managers etc and yet, I’m not sure the country as a whole doesn’t push the FA into similar sorts of decisions. Plenty have jumped out of their prams over Wilshere’s ‘English players for England’ comments and yet they may be the very same people who didn’t have issues with Foreign managers being brought in to manage England. Realistically though, by doing either of these things, the FA are simply throwing plasters at a problem that requires nothing short of major surgical reconstruction – they’re attempts at fixing us temporarily. Attempts to get a quick win and keep the country and the country’s media off their backs. The real problem remains though, with ugly scars that are there for all to see and wounds re-opening the minute they take a knock. Investment (and not just financial) is required to achieve sustained success.

Look at France, in 1988 the French Football Federation opened INF Clairefontaine, a national football centre for training and developing the technical skills of their best young players.  Subsequently, after the emergence of players like Henry, Zidane, Vieira, Blanc, Deschamps, Thuram, Lizarazu, Desailly, Anelka and Pires, is it any wonder they went on to win the 1998 World Cup, Euro 2000 and were runners-up at the 2006 World Cup?

The German Football Asociation overhauled their country’s footballing infrastructure, investing heavily in the coaching and development of young players. Professional football clubs in Germany were given the remit of producing skilful, intelligent players by setting up youth academies with highly qualified coaches. Players like Schweinsteiger, Ozil, Khedira, Muller, Reus and Gomez must attest to the German FA being entirely right in their approach, as indeed, would Germany’s presence and performances in the Euro 2008 final, the World Cup 2010 semis and Euro 2012.

Spain likewise, take the development of players very seriously. Not only do all Spanish coaches promote the same style of football – technical, possession-based, tika-taka – they promote talent. They bridge the gap between their reserve and first teams, with reserve teams playing competitive football in the higher leagues. Not only do they have 18 and 19 year olds playing in the Spanish second division, against men, the competitive football allows these young players to remain at clubs, with first-team players then playing alongside each other before progressing to the senior squad.

In England, our young players play against other young players, so the first time they find themselves up against quality senior players is if they make it to the first team. So our 18 and 19 year olds end up out on loan – away from their clubs and missing out on the opportunity of playing alongside future team-mates.

Of course, the FA will talk up their ‘investment’ in developing this country’s young players but for me, whacking a car park on one of England’s most celebrated playing fields for the Olympics, sums up just how serious that investment is.

Of course it takes money – for decent pitches both indoor and outdoor to be available (geographically and financially) to all ages, for properly-paid youth-team and skills coaches and for the in-put that teaches them what professionalism really means – but the FA have to invest more than that.  If we’re ever to truly compete with the likes of France, Germany, Spain and the rest, the FA have to grow a pair between them and adopt a more adventurous, attacking philosophy across all development teams, with the onus on technical development and education – and move away from the antiquated ‘it’s our national sport’ ideal that’s left them in the position of begging other national’s to come and play for us.

In that sense, Jack Wilshere is absolutely right – we need to get our own house in order and put the work in to have what our neighbours have – it works for the current World Champions after all.

Mourinho: Why All The Questions?
Chelsea On Collision Course With FA Now?