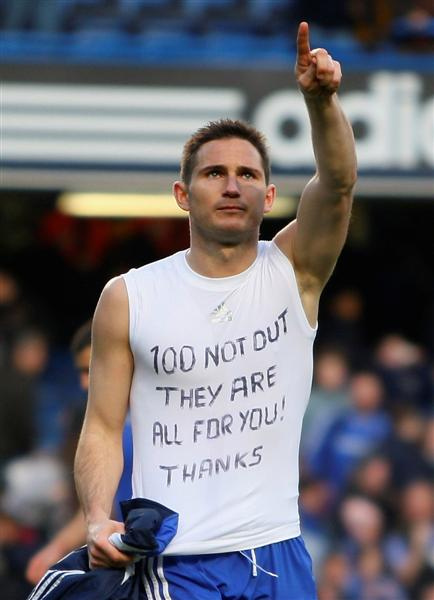 Tonight, Frank Lampard wins his 100th cap for his country as England take on Ukraine – not bad for a fat boy eh?

He’s faced dogs abuse at times but in true Frank Lampard style, he’s risen above all that, got his head down and battled – and at the age of 35, joins the likes of Peter Shilton, David Beckham, Bobby Moore, Sir Bobby Charlton, Billy Wright, Ashley Cole and Steven Gerrard as an England centurion – and y’know what? He’s bloody well earned it.

Of course, some would call me biased, since coming to Chelsea he’s racked up goals the way we’ve racked up trophies – averaging 21 a season between 2004/05 and 2009/10 and a still impressive average of 17 across his 12 seasons. It’s not all about Chelsea though because even for England Frank Lampard is without a doubt one of the finest midfielders this country has ever produced.  Whilst the press fawn all over Gerrard, clearly favouring him in any comparisons drawn, yet Gerrard’s 104 caps have given England a return of 20 goals, with Frank already standing at 29 goals from 99 caps.

There’s more to Frank Lampard than his unbelievably consistent goal tally from midfield though because not only has he been an exceptional player throughout his career, he’s got his head screwed on as well. He rarely involves himself in nonsense on the pitch, doesn’t go in for leg-breaking challenges and even in the face of the bile spewed from the stands in his direction over the years whether playing for club or country, Frank Lampard gets on with the job in hand.

I could go on about the trophies he’s won, the medals he has, or even the records he holds but they all speak for themselves. Instead, going into another landmark game for Frank Lampard, I’ll sum it up in some familiar words from the man himself back in 2008: