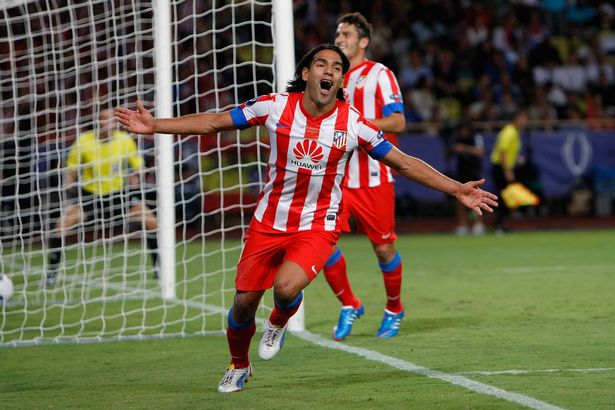 It seems as though Chelsea are the front-runners to land Atletico Madrid hot-shot Radamel Falcao, as it has come out that the Spanish club are in need of the cash.  However, Blues fans are not likely to see the Colombian international heading to Stamford Bridge until next summer, as Atletico are not prepared to let him go in the middle of the season.

It is thought that they will be asking for a fee in the reign of €60, which would help them out a great deal and help them with the vast amount of debt they are in right now.  The general manager of Atletico said:”The €60m for Falcao would immediately remove Atletico’s economic problems,  But Falcao will carry on here, certainly until the end of the season. If Atletico don’t get into the Champions League or we can’t afford to pay Falcao then I don’t think even Real Madrid could cover that.”

Falcao himself has hinted at a move to either one of Chelsea or Real Madrid in the past and with Real not showing much interest at the moment, Roberto Di Matteo could land one of the most exciting and prolific strikers in the game.  The 26-year-old is currently on eight goals in the Spanish top flight this campaign, which puts him level with Lionel Messi and Cristiano Ronaldo, something that does not happen unless you are a very good player.

It would certainly be exciting to see just what he could do in the Premier League, especially alongside the quality players already at the Bridge. There is not a great deal of competition for places up-front, with Fernando Torres being almost guaranteed a spot in the starting eleven.

Falcao and Torres could certainly work well together, or battle it out for the lone striker position that Di Matteo seems to like playing. The same applies to the tactics at CasinosMobile.com of course, there a lots of options available – but which will be taken?

It may cost a fair bit to bring in the Atletico man, but he would be worth every penny and as long as he keeps scoring goals this season, he will be a valuable addition to a Chelsea squad that are capable of achieving great things in both Domestic and European competitions.

Reaction: Turns out we don’t need to Use the Force…
Di Matteo Considering Brazilian?