Reaction: Turns out we don’t need to Use the Force… 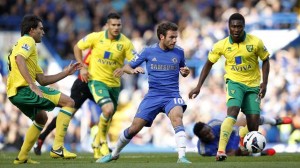 I’m not going to say it. I’m not even going to think it, or write it. However we are already seeing very encouraging signs that we can, and will build on last season’s 6th place league finish. With the attacking promise shown against Norwich yesterday, only time will tell how high that could be.

If Chelsea can continue to play football of the fluency and invention we saw against Norwich, then we will surely be challenging Manchester City for their title come the end of the season.

What particularly impressed me was the way we retained possession, moved the ball confidently, and created openings in the final third. In previous Chelsea sides, if the door wouldn’t open, we would simply batter it down. Not anymore. Now we have players who are capable of holding the ball deep in the opposition half, finding space, and most importantly picking passes that even your average premier league player will not see.

Following our second season under Carlo Ancelotti, I was crying out for us to sign a natural winger, someone with raw pace who could beat the full back on the outside, then deliver a precise cross to Drogba/Torres/the arriving Lampard. We needed someone who could play that killer ball, someone who could provide that bit of magic in tight games. I wanted us to sign a winger for this job, and we instead we got Juan Mata.

Excuse the pun, but that hasn’t mattered in the slightest. I was adamant that we needed a wide player, but when you consider the way football has changed in recent years, characterised by the intricate, varied passing games of both Barcelona and Spain, we seem to have bought very well. We still go through the opposition with our new crop, but we seem capable of dancing rather than fighting our way through. And we’ve managed that without an out and out winger.

The thinking behind  Mata’s signing was to add a player who could not only produce a killer pass, but a player who has the ability to think quickly under defensive pressure, and most importantly, a player who rarely runs out of ideas.

For all the merits of Chelsea sides in recent years, from Didier Drogba’s physical attacking dominance to the fierce footballing intelligence of Frank Lampard, I would argue that we have lacked a true flair player for many years.  Well now, it would seem we’ve got 3 on our hands. Oscar, Juan Mata and Eden Hazard each bring something different to the party.

In Oscar, you have a trademark Brazilian player, daring, ambitious in his attempts to create chances and very direct. His dribbling looks to be top notch, and had he finished the chance he created for himself in the first half it would have been an individual delight. But we know he can shoot. Suffice to say his first touch and finish for his second goal against Juventus were sumptuous.

We’ve seen enough of Juan Mata to know exactly what he can do. Last season’s Player of the Year is an expert playmaker who is not known for his pace, but his speed of thought and deft touch. A typically modern Spanish player, ever-impressive when picking the right passing option and then finding the target, he is the zenith of our modern attacking players. Given his maturity, mental craft and thick beard, it is easy to forget he is only 24, and a player that can surely be considered a mentor to our other young creators.

And then there’s Eden Hazard. From what we’ve seen of the Belgian so far the club have been vindicated in their decision to splash £32million on the 21-year-old. Deceptively strong, agile and, like Mata, very mature for such a young player, the prospect of how many penalties he will win us is mouth-watering. An excellent dribbler, he has the pace to play on the wing but the strength and creativity to play through the middle, making him a versatile, unpredictable player.

And what the Norwich game shows,  encouragingly both for this season and for the future of the club, is that these players seem to be operating on the same page. Their combined intelligence, speed, awareness and technique form an attacking combination that will be able to unlock any defence in the world.

I have always been an advocate of the philosophy that the key to effective attack is unpredictability. The slower and more predictable your play, the easier it is for the defence to extinguish the attack. If a defence cannot anticipate where the ball will be played, confusion is caused and errors result.

Consider that these players do not play in restricted roles and have a license to interchange, drop off, move wide or do whatever they can to confuse the opposition, we have real potential to inflict damage on Premier League defences. These players will not only be difficult to mark, but when they do receive the ball it is difficult to win it off them , and prevent them from plying their trade, whether it is a strong, jinking run of Hazard, a delicate through ball from Mata or an daring dribble from Oscar.

But back to what I said earlier, I’m not getting too carried away with the idea of how good we can be with these players. Well maybe I am. Just a bit.  One thing we all anticipated before the season, and is now confirmed, is that with our attack, we do not need to Use the Force.