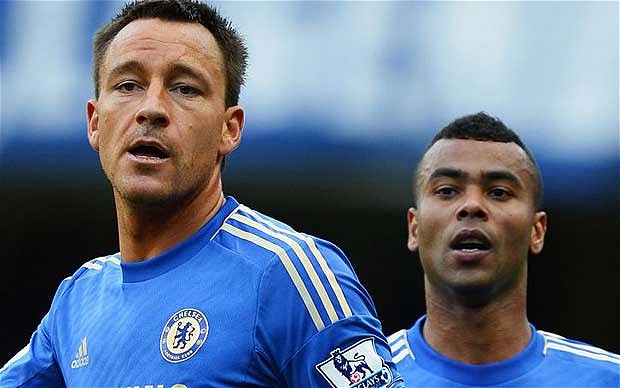 How is it that in a court of law John Terry came away with a not guilty verdict against a charge of a racially aggravated public order offence and yet the press can still label him a ‘racist’ and get away with it?

How is it also that he’s then subsequently charged by the FA with using “abusive and/or insulting words and/or behaviour” with the further charge that he is alleged to have “included a reference to the ethnic origin and/or colour and/or race of Anton Ferdinand”, the FA Commission ban him yet explicitly state (repeatedly) “It is accepted by everyone involved in the criminal and disciplinary proceedings that Mr Terry is not a racist” – and yet, the press continue to not only label him a ‘racist’ in print but also continue to get away with it?

When one of our players says something derogatory about the FA on Twitter – retracting it and apologising unreservedly within hours – these paragons of virtue are so outraged, they’re calling for him to be banned from doing his job. And yet, they can use their positions to persistently harass individuals (and their employers), with libelous headlines and statements, and get away with it?

John Terry has answered the charges against him, both on a legal and professional level, and after extremely protracted investigations he’s come out of it with a not guilty verdict in court, a 4 match ban for his club and an enforced retirement for his country. Somehow though, that’s not enough for the press who’ve climbed back on their bandwagon seeking further retribution by way of his public hanging dismissal.

They haven’t even stopped at that though, through their sensationalised headlines and column inch character assassinations, they’re calling on Chelsea supporters to turn their backs on both John Terry and Ashley Cole, and for Chelsea FC to sack the pair of them. I have to say that bearing in mind the evidence from both in court was regarded as sufficiently acceptable to return a verdict of not guilty, it would be an interesting disciplinary policy that supported the sacking of either of these extremely valuable assets. As for the suggestions that Chelsea supporters should turn their backs on two players without whose passion, drive and commitment on the field wouldn’t have had the good fortune to be a part of even half of Chelsea’s achievements to date, well, let’s just say I can’t see it happening.

Let’s be clear here, these people seeking such a penalty for our players, are part of establishments who conveniently let racial tweets about one of those players (and the nominal fine applied to it) slip under their radar because going after the player responsible for that transgression clearly didn’t sit with their agenda. These people so morally outraged by our player’s use of the word ‘twat’ also happen to be part of establishments who appeared ever so slightly less outraged with David Cameron’s use of the same word on national radio. Although to be fair, he’s just the country’s Prime Minister and not a professional football player.

The headlines shout about ‘John Terry and Ashley Cole Shaming England’ and yet the point these headline writers miss is the part they play in bringing shame on this country. Let’s not forget these are the very same people, who, given a poorer performance from England in the absence of certain players, will gladly conjure up something equally derogatory to pen about England and its current management. The hypocrisy, at every stage of this saga over the past year, has known no bounds.

If the press agenda really was to help in the fight against racism in football, then fine, I’m all for that. I still believe – as do the court and the FA remember – that John Terry is no racist. Whether in response to provocation, response to what he believed was an accusation, in the heat of the moment, or not though, John Terry used 3 words that together, in an aggressive manner can be interpreted (and in this case misinterpreted) as racist. That was unacceptable and has been duly dealt with – or so I’d believed. Of course, the FA should, and as it turned out could (since they chose to ignore the court’s verdict anyway) have dealt with it at the time and football could then have moved on with clearer, more constructive guidance for club’s and their players to move forward with.

That, as we know, didn’t happen though. The FA pussy-footed about, allowing the CPS to step in and the media to turn it into a witch-hunt, the scale of which we’ve never seen and hopefully will never see in this country again. Clearly, this wasn’t therefore, the press simply adding their weight to the ‘Kick It Out’ campaign because if they genuinely wanted to do that, there’d be far more constructive and far less damaging ways for them to do that both before, and after, this incident.

The FA likewise, with swift action, could have taken a stand against each and every incidence equally – they didn’t. Instead, they elected to pick and choose whose evidence would be accepted unchallenged and whose would require cross-examination, raising questions about their disciplinary proceedings. They also chose to subject, and subsequently punish, one player involved in disciplinary proceedings for the use of “abusive and/or insulting words and/or behaviour”, whilst failing to provide an explanation for the complainant – who also admitted a breach of this rule – not having to answer for his own actions. To add further insult to injury though, they even went on to fine the ‘victim’s’ brother the sum of £45,000 in a ‘secret hearing’ for a clearly racist tweet referring to Ashley Cole as a choc-ice – a tweet they preferred to regard as ‘improper’ rather than one carrying racial connotations. Yet, issued a £220,000 fine in addition to a 4 match ban for the use of 3 words found – in a court of law – not to have been said with racist intent.

Such inconsistencies can not only serve to confuse the issue further but also leave the FA wide open to questions regarding discriminatory practice and more importantly, in no way does it address the issue supposedly at the heart of this storm. And whilst Chelsea FC are being called upon by the press and the public by the way, not by football’s governing body, to take action in excess of that already taken, what’s not clear is the how and why?

As far as Ashley Cole’s tweet is concerned, the club have already issued a fine with the suggestion that internal action will be taken but as far as any questions raised by the Commission regarding his evidence, since the evidence was deemed acceptable in a court of law and the FA’s 63 page report – almost a year and potentially hundreds of headlines after the event – is as incompatible with a fair hearing as you’re likely to get, I fail to see what a club presumably accepting of a not guilty verdict in court, are expected to do about it.

Likewise with John Terry, he’s been through a legal process which determined him not to be racist. He’s been through the FA disciplinary proceedings, who, despite repeated statements accepting JT is not a racist, have issued a ban and fine for a breach of their rules. Should the club issue a fine as well? Or is that simply not regarded as enough? Maybe a public flogging would suffice? Or better still, maybe the press could tell us how Manchester United handled things when it was Rio Ferdinand making disparaging remarks of a racial nature? No?

Of course that sounds a bit tit-for-tat, and that’s not my intention here. Racism is a serious issue, it shouldn’t ever be brought down to the playground ‘he said, she said’ level – in fact, it really shouldn’t ever be something that has any bearing on the game at all, ever. Neither should bullying and harassment though and yet there seems to have been an acceptance, and worse still, a collective permission of this granted over the past year under a guise of seeking justice.

There’s a difference between seeking justice and vengeance though, so if this is about pointing the finger at what constitutes ‘bringing shame’ into the beautiful game, lets at least do it fairly.

Reaction: Turns out we don’t need to Use the Force…
Who’s Really Bringing The Game Into Disrepute?