Why Oriol Romeu can fill the half-full glass 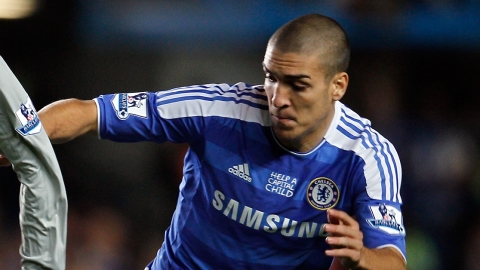 Ok, you’re getting a break from me today courtesy of a debut piece on here from a new addition.  James is Chelsea through and through and he’s not bad at this writing lark, so here’s his take on our midfield right now….

When I think back to the Chelsea side that Jose Mourinho assembled in his first season as manager, I have a great feeling of longing for what once was. Perverse, you might say, given what we have achieved without him.

Granted, under Ancelotti we won trophies playing merciless attacking football, which was not only entertaining, but left opposition teams feeling violated, which was absolutely fantastic. And last season, our very own nine-lived cat lifted the European Cup, and banished the demons that have lingered since Moscow. After AVB, the ‘master’ of subtle man-management had left the club, we showed resilience and courage beyond what many had thought possible of the team.

Following last season’s ugly, hard-fought European victory, Roman Abramovich wants an array of dazzling attacking players to light up Stamford Bridge and make Chelsea F.C. a world-famous brand known for artistic football. We all know this. It is no secret he wants beauty as well as results. You could argue in that respect that for the time being we are assured, in the form of Juan Mata and Eden Hazard, young, versatile, quick-thinking players who can produce a goal-scoring opportunity from nothing. In these players, we have the tools to get between opposition lines of defence and midfield, and exploit the opposition in a way that is ever-present in modern football.

What is concerning is that since the departure of Claude Makelele in 2008, we have lacked a world class defensive midfielder. True, we have had excellent players occupy that position, including Michael Essien, Michael Ballack, and more recently Frank Lampard. However none of these players are/were naturally defensive. Snuffing out opposition attacks is not their primary objective. And this is the genesis of my longing for Mourinho. He recognised this, and consequently Makelele was one of the mainstays of Mourinho’s reign.

Filling this anchoring role is something Roberto Di Matteo needs to address, because, let’s face it, within a couple of years Lamps will need a Zimmer frame to get past the halfway line, and John Obi Mikel will need said Lamps to hold his hand at any given opportunity, which means one thing; a weak defensive shield. However, there is a solution to this problem, and is sat under our very noses.

Why the Spaniard has not been played more until now is a tad surprising. In the brief spell during Villas-Boas’ reign, whenever he was selected, he looked a clever, resourceful player. He has an excellent passing range, moves the ball quickly from deep positions and has a sharp intelligence for reading the opposition’s attack, which more often than not has resulted in him breaking up play in front of the back four.

He shone in the big games at that time. In our must-win game against Valencia in the Champions League group stage, he was outstanding, operating in a deep defensive position, always ready to start an attack once he had won the ball. In our 2-1 league win against Manchester City, he had David Silva, one of the most creative players in world football, and the in-form Premier League player at the time, in his back pocket.

Yet Di Matteo does not seem to favour him, and even towards the end of his tenure AVB used him less frequently. But consider that he is a graduate of Barcelona’s famous La Masia academy, and that he has only recently turned 21, and we have a player of real pedigree on our hands.

In my eyes, the only obstacle to him being a fixture in the side is the £13m buy-back clause that Barcelona could activate next summer. Arguably, if he were to get another run in the team at Chelsea he would inevitably catch the eye of Barca manager Tito Vilanova, and we would lose a real talent to a European rival. Perhaps the thinking is that if we keep him under the radar, they may lose interest. That’s what I hope anyway.

Compare what Romeu can offer in contrast to John Obi Mikel. Mikel is a capable player, although we might forget it at times. He can pass well, is strong and is technically good. However his game, as a defensive midfielder, is thoroughly flawed by an occasional inept sense of positioning, and a casual trot around the park which shows a certain indifference to his role. You don’t get that from Romeu. He knows exactly where he needs to be on the pitch and acts quickly, both in challenging the opposition and moving the ball up the field to provide a platform for the likes of Mata and Hazard to hit the opposition when they are frail.

Many will cry that Mikel is worthy of a place following his European displays last season. This would be a valid point were it not for the fact that we will not be playing Barcelona and Bayern Munich every week. He will not raise his game to what it could be, and instead will settle for mediocrity, in games where we need consistent performers, not insignificant bystanders. He is a glass half-full, holding many skills that are of real use, but flawed by his own errors.

Mikel is not without his use, but if Di Matteo has a brief of building a team of real class, then he needs to start with the basics, and ensure the supply line to our artistic attackers is not blocked by pedestrian passing. In Romeu he has the chance to blood a true talent, a player who has had the education, and now the opportunity to become a player of real quality.

Please Bobby, if we don’t make the most of Romeu then someone else will.