Have We Had Enough Fergie Time Yet? 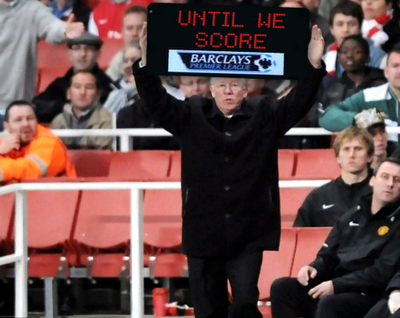 When I read a tweet yesterday saying Fergie was complaining about the lack of time added on at the end of their game, I thought it was a joke.  I mean, I just thought ‘he wouldn’t go down that road again would he?’ Well apparently he would.

We all know he’s pressured the refs for years, it’s common knowledge isn’t it?  Occasionally he’s overstepped the mark with it, questioning not only their fitness levels but also their competency to ref ‘his’ games but aside from the odd personal attack over the years, the idea of ‘Fergie time’ has usually amused us.

Even before the end of yesterday’s game, with United trailing 3-2 at home to Spurs, the question of how much time would be added on was being asked. Twitter was full of it, from suggesting Fergie had lent the ref his watch, to rumours MOTD had been put back an hour to accommodate injury time, we all had a good laugh about it – because that’s what it’s become right? A bit of a joke.

Seemingly though, Fergie was serious because after the game, he called the 4 minutes they got an “insult”, insisting “It was disappointing because the record has been fantastic.  They gave us four minutes (injury time), that’s an insult to the game. It denies you a proper chance to win a football match.

There were six substitutions, the trainer came on, so that’s four minutes right away and the goalkeeper must have wasted about two or three minutes and they took their time at every goal kick.  That’s obvious to everyone today and it’s a flaw in the game that the referee is responsible for time keeping. It’s ridiculous that it’s 2012 and the referee still has control of that.”

Who does he suggest has control over the time then? Well obviously the funniest thing about his statement is that we all know if he had his way (and he very often does), it’d be up to him to decide how long his games go on for. Take the humour out of it for a minute though and think about it, imagine someone was trying to tell him publicly how to do his job – yes, there’d be hell to pay. And yet that’s effectively what this is about, time after time.

Even back as far as 2009, after a defeat to Aston Villa, the United boss was saying “The timing should be taken out of the referee’s hands.  Those two stoppages took two minutes and 20 seconds, and then there were the substitutions on top of that. That is disappointing. It is silly really. We are nearly in 2010. A change should be made.” Of course, he wasn’t complaining a couple of months earlier when Michael Owen scored a winner against City some 5 and a half minutes into time added on was he? No of course he wasn’t because time added on worked in his favour that day.

The problem is though, as funny as it is – and there’s no doubt about it, we’ve all laughed at it – the pressure he puts on refs (and the effect it has) is no joke. Whilst other manager’s daren’t say a word (like AVB before yesterday’s game) and even if they do, they’re called out on it (like Mancini last season, with Fergie complaining “Mancini was badgering the ref and the fourth official all game.  He was complaining about refs all week”), Sir Alex Ferguson seems to almost see pressurising officials as part of his job now. And not only does he get away with it but he will inevitably benefit from it.

No, I’m not saying they get all the decisions – I wouldn’t dare because I’d only end up with a load of stats thrown at me to disprove that particular argument – but what I’m saying is we’ll end up with there being some unwritten law between the officials whereby they’ll end up playing ‘next United goal wins’ at the end of every game and MOTD being put back to accommodate ‘Fergie time’ might not be quite as much of a joke as it was yesterday.

Unless of course, the FA call time on his nonsense so officials can get back to doing the job without his guidance – although that’ll never happen.

Roberto Di Matteo: I Was Right To Pick JT
John Terry: The Other Side