Rio Recall? Don’t Do It Roy! 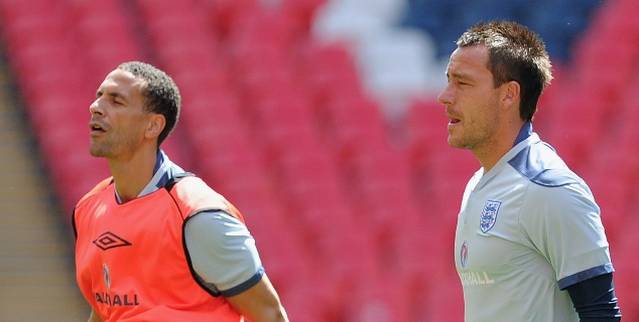 So, John Terry retires from international football and literally within minutes people are asking whether Rio Ferdinand will get a recall. What I don’t understand though is why?

Roy Hodgson made it clear Ferdinand had been dropped for ‘footballing reasons’ and unless I’ve missed something, he hasn’t suddenly morphed into a fit, young player for England’s future. I know there were plenty who wanted to hang the blame for the end of his international career on JT – but let’s face it, there’s plenty who’d hang the blame for the national debt squarely on JT’s shoulders if they could throw half a reason together in their own mind – the fact is, there were plenty of reasons Rio Ferdinand was dropped, and they all related to football.

Of course, the fact that putting him and JT in the same dressing room would have been like sitting Heather Mills and Paul McCartney at a table for two won’t have helped his cause but then again, that would only have helped Hodgson make a decision that needed to be made anyway.  Gary Cahill had been brought in, younger, fitter, a player for England’s future and at the start of a decent pairing with JT at club level as well, so it made sense to keep a working partnership rather than force a new one.

As I said at the time, John Terry was known to have performed consistently, for Chelsea and England, for years without being plagued with persistent injury. What’s more, he didn’t have a manager casting doubt over his ability to endure an international tournament. And all this, is even before Hodgson looked at the leadership qualities John Terry brought with him – way above and beyond any leadership Rio had established in the England dressing room.

Chelsea bias aside because I’m not even having a go at Rio as a player here, the bottom line as far as I can see is that Rio Ferdinand had reached the end of his England days – and whether John Terry has retired or not, that hasn’t changed. Once players get to a certain stage in their careers, they can’t perform at the same level for club and country in the same way anymore, some just find that harder to accept than others – John Terry certainly wouldn’t have made the decision to retire if his hand hadn’t been forced. But as I’ve already said this week, England’s loss will be Chelsea’s gain because he’ll be able to focus completely on playing for the club and the supporters who know his worth.

Rio Ferdinand should do the same – and Roy Hodgson shouldn’t give him any decisions to make about it.