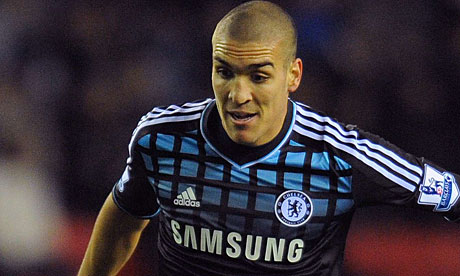 With Meireles gone and Essien returning back to his “Daddy” it seems that we have left ourselves fairly short in the central midfield area this season, or rather the 2 in the 4-2-3-1.

Last season one man that really made a impression on me in such a short period of time was Oriol Romeu, when played, he was a super quick passer, and almost always managed to retain possession, very similar to the skill sets I see In Josh McEachran, and the definition of a Spanish defensive midfielder.

On the other hand, although I was astonished to note Mikel’s passing statistics this year (at least 90% passing accuracy in every premier league game so far) I still feel that there are some serious flaws within his game, and these flaws can’t be left unmanaged especially in the new playing style we are trying to install at the club. He can be caught out at the worst times, often it’s his simple mistakes that can lead to unnecessarily conceded goals. However my biggest concern, one that has left me red faced from screaming at the pitch or TV is his complete inability to pass the ball forwards, and his constant need to slow down any sort of play that runs through him. I have seen him countless times singlehandedly kill off promising counter attacks.

Now although physically a lot stronger than his Spanish counterpart, this isn’t a necessary part of a defensive midfielder’s game, and can be worked around. I strongly believe given the right instructions and advice, Romeu would be able to anchor that midfield, already proven to us that he reads the game better than most.

Perhaps it’s time then, to finally abandon the hopeless chase for the next Makelele (there will only ever be one) and finally embrace the Spanish way, letting Romeu have a run in the first team, with an eye to a deep playing master class partnership with Oscar in the near future. Added with our now attacking abundance upfront, our team could really be a force to reckon with for many years to come.

Now don’t get me wrong, I understand that we have a long season, and I fully expect everyone in the squad to be playing a fair bit, I just feel this may be the way forward for the future, but hey what do I know, I’m a football fan!

Chelsea Transfers: A Look At What We’ve Got
Chelsea Gossip: Looking Better For Marin Than Malouda