Chelsea Transfers: A Look At What We’ve Got 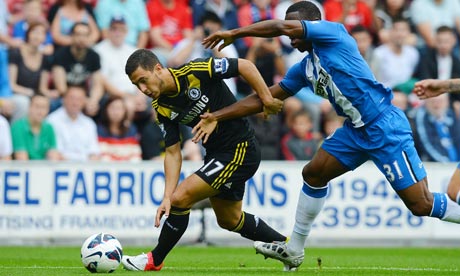 So, the transfer window is closed and there was no last minute signing from Chelsea. I’m not too worried since some key signings came in earlier in the transfer window but there are still a couple questions and positions that will still need to be figured out based on the squad now available. I will go over in my opinion what we will most likely see focused on in the squad and some of what the new players add.

Anyone who has watched the first three Premier League matches knows that Hazard has been the key purchase for Chelsea. He is the one signing that has walked straight into the starting eleven and with good reason boasting one goal, four assists, and 89% passing. He has even got Torres scoring and the play between them looks like it could be the key to the Torres revival.

I think Victor Moses is a good purchase because he gives the squad some much needed width as he prefers being on the wing. In some of the lower points of play so far, the team has been slowed down centrally outside the box because the midfield gets crowded. I will be interested to see how he affects this aspect of the team.

I have full confidence that Torres will be on his way to 15+ goals this season. Chelsea have not been a team that relies on its strikers. It is really a curiosity that Chelsea did not get a back-up striker. What this must mean is that strategically Di Matteo would rather just rework the attacking midfield when the attack needs a change or that he is more seriously considering Sturridge as a striker. There hasn’t quite been evidence of the latter but you have to think Di Matteo knows not to rely on one striker regardless of who it is.

The purchase of Cesar Azpilicueta solved what is in my opinion a serious problem in the defence which relates right back to the width problem I mentioned earlier. Most teams have fairly good, fairly quick wingers. If Chelsea hope to not get as exposed against these teams then we need the pace to match these wingers. As great as Ivanovic has been and as good of a defender as he is, he frequently has to be covered by Mikel or Luiz if he surges up the field and we lose possession. I think it would be nice to see him rotate between CB and RB now that we have a RB. I think the defense will look stronger now that there will probably be less crosses coming in from the wings (to some degree). Also, I know the managers haven’t really considered or implemented this but I think we may need to see the likes of David Luiz up in the DM role. Especially since he has once again become a questionable CB and I would personally put Cahill and Ivanovic over him. I have recently seen news that Meireles may be leaving for Fenerbahce, combined with the fact that McEachran and Essien are out on loan and it seems like our depth in the DM role is quite thin if Mikel or Lampard can’t play. Maybe this is where Romeu somes in (remember him?).

Right now it seems pretty certain that we are sticking to the 4-2-3-1 but the way the squad is shaping there may need to be a revision or two because the Striker and Defensive Midfield roles seem a little thin if people are played in position.