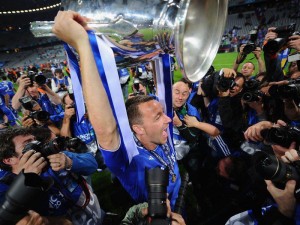 All the talk this summer has been about the battle between the two Manchester clubs for the Premier League title with some people already suggesting that it is a straight battle between City and United for top spot. What about the Champions League and FA Cup holders though? Chelsea have to be big contenders for the title.

Confidence in the squad is sure to be incredibly high despite the Community Shield defeat to the Citizens over the weekend. Few teams have shown as much intent as the Blues in the transfer marker either, Eden Hazard is sure to only get better as the campaign goes on. There is no doubt he is a massive talent.

Then you have Oscar, who was one of Brazil’s key men at the Olympic Games this summer. The Brazilian could really set the league alight. Add these tow exciting youngsters to the current crop and Chelsea could really have the makings for success. Not just those interested in Chelsea news should believe this either.

What better role model to have for these attacking midfielders than Frank Lampard, who has been one of the best the Premier League has ever seen.  Roberto Di Matteo will need to use Lampard wisely and you know that he will pop up with goals when it really matters.

It is safe to say that so far, Fernando Torres has been poor in a Chelsea shirt. This could be his year though. With Didier Drogba leaving Stamford Bridge it looks as though Torres will be the main man who leads the line. After a successful time at Euro 2012 he has some much needed confidence and got his campaign off to a flyer with a well taken goal against Man City.  The Spaniard can be one of the best strikers in world football and if he is on form and getting the right service, the Blues will be right up there.

It seems as though Chelsea have a superb balance to the squad – an experienced goal-keeper and defence led by John Terry, a midfielder that has a mixture of ball winners and flair players and a strike force capable of scoring 30-yard screamers or simple tap-ins. Everyone interested in Chelsea betting will concede that the start is vital. Chelsea need to come out and attack teams right from the beginning and get some big wins under their belts, piling the pressure on the rest of the pack.

As long as Di Matteo gets his tactics right and is given money again in January to improve the squad, then the Champions of Europe will challenge on all fronts this campaign.  It could be another season full of silverware.

CHELSEA 2-3 City: Red Gives Us The Blues
Lampard’s Captaincy And An Unexpected Bonus FOR JT & Ivanovic