Chelsea: Where Do We Go From Here? 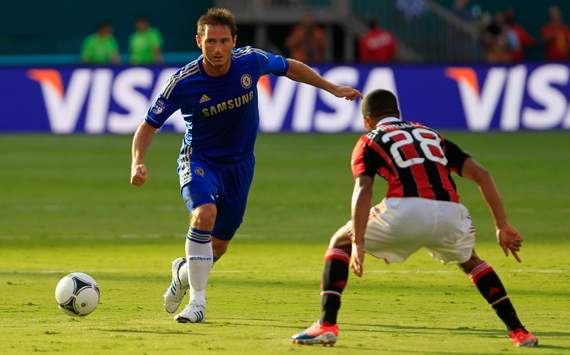 I decided to hold off writing another post until after last night’s match and then look forward to what we do post USA Tour. I’ve begun to make mini match reports so I can remember observations moving forward. In this post I will talk about both what I observed and what should probably be looked into before we begin our campaign for the League and to maintain our Champion’s League Cup. I try not to be too critical because it is only pre-season.

First I will go over the good I got out of this pre-season. The biggest one in my opinion has to be our star signing Eden Hazard. Despite not scoring, Hazard played as well as ever and with a slightly less lenient ref would have been in the box on every run. He will be the player that other teams apply one or two men to. The brilliant thing about this is that I can see him and Mata becoming a twin dragon attack in the midfield capable of weaving through most defenses. I truly cannot wait to see them play in the same match.

Another slightly more subtle but impressive introduction is Sam Hutchinson. He has a great story about coming back from what seemed to be career ending injury and even if he isn’t playing a lot this season I’d like to see him get time. Our strength in the midfield in general is quite formidable and this doesn’t even take into account that Mata and Oscar will be in the mix, both starting within a week or two of coming back from the Olympics. Our style of play is definitely going to be faster and more attractive. On a side note, hopefully we are getting closer to seeing McEachran get playing time. I know this midfield is continuing to get more competitive but he definitely has it in him to benefit the side.

Now for the main things I observed and can see being worked on. Starting from the back, we have quality defenders. What we need is to find the central defending pair with the least risks. Only so many times can we do our characteristic goal line clearances. At the end of the day we didn’t really get scored against a lot and most of it was our fault. Acquiring a proper RB is key because it allows Ivanovic to be in the mix centrally. With the way the game is played now you need someone who will keep up with the runs of the wingers present in the game now and cover the inevitable crosses. I’ll wait until our first few season matches to see if this is going to be a serious problem.

The much larger problem is what we do up top. We all know Drogba’s departure left a gaping hole in the striking options. Fernando Torres is obviously our key striker now. I feel he is definitely going to fulfill that role but we do need competition and just plain back up for him. This is why it’s a shame we cleared out all our strikers in the course of a season. It ideally would have been nice to keep just one experienced bit part striker.

Right now Lukaku is still raw and confused as to how he wants to play. A Premier League loan would be very helpful because it would take serious pressure off of him while he learns. Piazon should definitely get some Carling Cup play or something because he did nothing but impress for someone so young. It really still comes down to what Di Matteo envisions. Maybe our midfielders do the scoring and the “striker” is almost a false 9 to play off Hazard, Mata, Lampard, etc. Victor Moses may not be a bad idea since he’s fairly cheap and won’t complain about not getting played as much a Torres. Sturridge has been asking for ages but something must not be happening in that case. Maybe it will be different after the Olympics. Either way, any striker must work around this midfield and a decision must be made soon as it’s not fun to lose simply because you didn’t score a goal.

There are obviously more things to think about but from my observations, observations from others on Twitter, and the commentators, these seem to be the biggest talking points at the moment. I’d love to get this sorted before Man City because I don’t know if anyone else saw it but Aguero and Tevez are looking to be a nightmare (especially on the counter attack).