John Terry: Not Guilty And Still On Trial 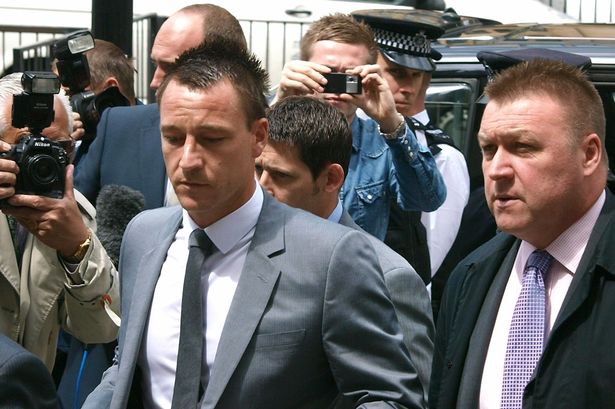 Well, we knew whatever the verdict it would make little or no difference to some people didn’t we? I have to say though, I expected the worst shit to come from opposition supporters – yet that hasn’t been the case so far. Oh, I’m sure they’ll deliver their opinions in full voice throughout the season, in fact, the reason we haven’t had the benefit of their wisdom quite as vociferously as expected yet, is likely to be because they’re furiously scribbling rhymes they can sing at us.  For now though, or at least as far as I’m concerned, the worst of it seems to be coming from footballs ‘professionals’.

You can’t have failed to see or hear what Garth Crooks has had to say on the subject of John Terry’s verdict, backed up in his crusade by Jason Roberts and other equally uninteresting players. Of course, plenty seem to be having their say – particularly on Twitter. We all know by now what Rio Ferdinand had to say earlier in the week even before the verdict, and maybe with the same sort of rules being applied to all, he’d have found himself up in front of the court for contempt whilst the trial was ongoing.

It doesn’t work like that though does it? Because this is John Terry – and the one thing that’s become abundantly clear ever since the allegation was first made, is that that’s what really seems to bother the majority. They can dress it up as a concern for racism within the game as much as they like, but the sheer fact they continue to dispute a not guilty verdict and still want another pound of flesh out of the Chelsea captain, for me, would indicate a more personal agenda is afoot.

For God sake, it was a not guilty verdict and we have Crooks bleating on about “fear that it will take us back to the dark days of the 1980s” if the FA don’t still throw the book at him. For what for Christ sake? Swearing at Ferdinand? Because we’ve already determined it was six of one and half a dozen of the other on that score. And whether Crooks likes it or not – and he’s making it abundantly clear he doesn’t – the context in which the words “black c*nt” were used has been cleared up. So fine, if the FA must charge JT with swearing, then so be it but they’d better make sure Anton Ferdinand – and any other player caught swearing from here on in – is subject to the same sanctions. Anything less than that would make this a clear case of victimisation.

Naturally, Crooks sees it differently, talking about “major concerns over what a not guilty verdict might mean for the wider campaign against racism in football”, conveniently forgetting that what the not guilty verdict means is that it has been decided in a court of law this wasn’t racism! I mean, is that so hard for him to accept? Would a guilty verdict and public hanging have been more to his liking?

Crooks suggests “If the FA don’t act on the undisputed facts, and find Terry guilty of bringing the game into disrepute, a lot of good people are saying to me that there’s no point in getting involved in the game at a senior level.” And for me, that raises a couple of questions, firstly, is he talking about the ‘undisputed facts’ that were in fact disputed and not found to have much validity? And secondly, if he’s so concerned about the game being brought into disrepute, why is he aiming this only at JT when, by his own admission, Anton Ferdinand was doing his level best to provoke Terry with foul mouthed goading of his own?

The answer, of course, is because irrespective of the verdict, Garth Crooks refuses to accept the court’s decision and is hell-bent on having his own kangaroo court see JT hung, drawn and quartered – and he’ll use his position as a pundit to do it. It won’t do his profile in the Kick it Out Campaign any harm either eh?

As for the suggestion that Rio Ferdinand (whose behaviour during the trial has been disgraceful and every bit as likely to bring the game into disrepute, by the way), “who would have been a selection certainty for England at last month’s European Championship” if it wasn’t for John Terry, is an absolute joke. For someone in the game who seems to think he’s a cut above most, to disrespect the England manager’s team selection in this manner, borders on downright ignorance and utter arrogance. I mean, who the hell does this bloke think he is to say that when even Sir Alex Ferguson’s opinion of his own player was that he should be anything but a certainty for the England squad. John Terry went out to the Euros and conducted himself impeccably, as he has done every day of his trial – unlike some – and both Roy Hodgson then, and JT now, have been completely vindicated.

John Terry Verdict: Will Justice Be Served?
One Rule For John Terry…..