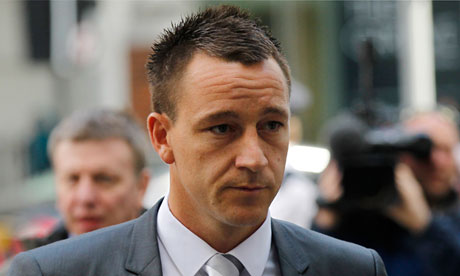 Finally, we’ve got to the last day of John Terry’s trial. Of course, even once the verdict has been delivered, it won’t be over though. It won’t be over for us because the debate will rage on whatever the outcome, and for JT because mud sticks following any accusation irrespective of guilt or innocence.

I don’t doubt there’s plenty out there who think it’s entirely fair. You see, even if JT is found not guilty, he’s still guilty as far as they’re concerned. Let’s face it they made their minds up the minute they watched the YouTube clip. It doesn’t matter that the clip itself, viewed by expert lip readers from both defence and prosecution, has been found not to prove JT’s words were straightforward racism, half the population will still interpret it as so.

That’s the trouble with this case though, as we’ve already heard from the start, it was forced into court with veiled threats of the “ramifications” otherwise. Would the CPS really have gone ahead on the strength of a YouTube clip otherwise? If it’s that simple to judge someone, shouldn’t they be as interested in comments on Twitter of a contemptuous and potentially slanderous nature during the trial? Why is it ok for one player to be subjected to a total and utter character assassination for something he’s accused of saying and another to be totally excused for actions seen by millions?

Don’t get me wrong, when I saw JT mouthing the words “black cunt” in that video clip, I feared the worst. Before he had the chance to put those words into a different context, it looked bloody grim for him to be honest. Given his version of events though, surely that was enough to cast a shadow of doubt over the allegation leveled at him? Enough doubt at least for the CPS to do something radical like, say, get expert lip readers in to re-look at the video before dragging it through the courts?  In taking it as far as they have, all the CPS did was give half the country (and some) permission to label John Terry a racist.

If the verdict this afternoon is not-guilty, do we then get to brand anyone giving evidence from the Ferdinand corner a liar? Well we can’t do that can we? Because we’re told Anton Ferdinand hasn’t actually accused Terry of anything, this only came about because an off-duty policeman took offence, right? Strange that Ferdinand’s PR agent should fight so forcefully to have it out in a court room then, and even stranger that his brother should call Terry’s version of events lies, since Anton apparently never accused him of that in the first place.

Anyway, after a final summing up yesterday, with the video their case hinged on now worth nothing, the prosecution resorted to quibbling over Terry’s use of the words “fucking” and more shockingly “and” – I mean, let’s just call the firing squad for that one eh? The defence meanwhile have stuck to analysing facts rather than conjunctions. Pointing out that under cross-examination the prosecution have already conceded John Terry is not a racist, Carter-Stephenson questioned why Anton Ferdinand did nothing after the game if it was so clear John Terry had shouted racist abuse at him. His initial claim that he hadn’t heard it (very odd considering everyone from off-duty policemen to QPR supporters in the crowd claim to have heard it) doesn’t cut it when we now know he watched the video after the game and still did nothing about it – until advised differently.

The barrister suggests this sort of oddity, amongst others, shows Ferdinand to be “inconsistent and unreliable both on words and events” and quite rightly says the ‘evidence put forward “could not satisfy the court to the criminal standard”.  As for the dubious suggestion that JT’s outburst came as a result of him losing control, Carter-Stephenson says of Ferdinand “Who is actually the person who has lost control on that day? Who is it that on the face of it is angry?  Who is it that follows another player to the halfway line shouting and abusing him and repeating an insult, which on his own evidence he says he did, over and over again?  That may be a good indication of who has lost it.  Mr Terry is a man with very considerable mental strength, and great self-control. You might like to contrast that to what Mr Ferdinand himself has told you he did on that particular day.”

Carter-Stephenson concludes “No matter what the words actually were, if they were or may have been Mr Terry repeating back what he believed Mr Ferdinand had accused him of, then that’s the end of this particular case.” And for me, that’s what today’s verdict really comes down to. On the strength of that, there has been nothing in the way of evidence to convict JT of the contrary. Not a single shred to disprove what John Terry is saying happened. Anton Ferdinand never heard it, the video can’t determine it and nobody else has offered anything of substance to prove the prosecution version ‘beyond a reasonable doubt’.

As far as I’m concerned, this should have been thrown out Tuesday anyway but if justice is served today, John Terry will be found not guilty and the bandwagon can fuck off and find itself another road to go down.